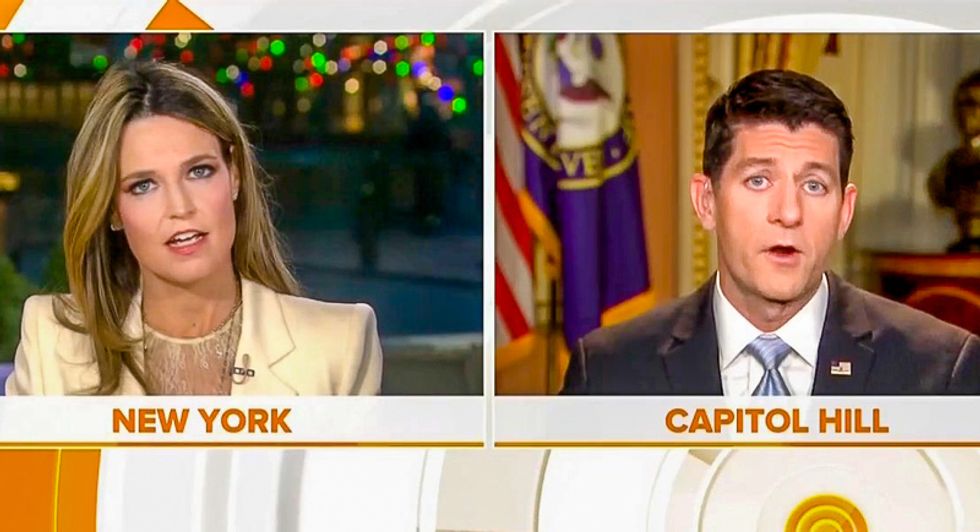 House Speaker Paul Ryan (R-WI) on Wednesday refused to say that he believed the women who have accused President Donald Trump of sexual misconduct because he is not sure what the accusations are.

During an interview on NBC's Today Show, which recently fired Matt Lauer over sexual misconduct allegations, host Savannah Guthrie pointed out that Ryan had called for House members to resign over similar accusations.

"President Trump has been accused as well," Guthrie noted as Ryan cleared his throat. "Three of those accusers recently asked for a congressional investigation. They want you, they want Congress to look into whether those accusations against the president are true."

Ryan stuttered as he insisted that "those are criminal matters and Congress doesn't do criminal investigations."

"You do ethics investigations," Guthrie interrupted.

"I would invite you to talk to the White House," Ryan said, encouraging the NBC host not to make accusations against the president into "some partisan thing."

"Let's give this issue the respect it deserves," the Speaker added. "And that's why we're taking this seriously and we're doing mandatory training, we're going to bring out a whole slew of reforms at the end of the week to show how Congress is going to get ahead of this problem and make sure that victims have rights."

"It should not be a partisan issue," Guthrie agreed. "The White House position on the president's accusers is that they are all liars. Is that your position?"

"Look, I don't even know what all of these accusations are," Ryan replied, sounding annoyed. "I'm focused on fixing Congress."