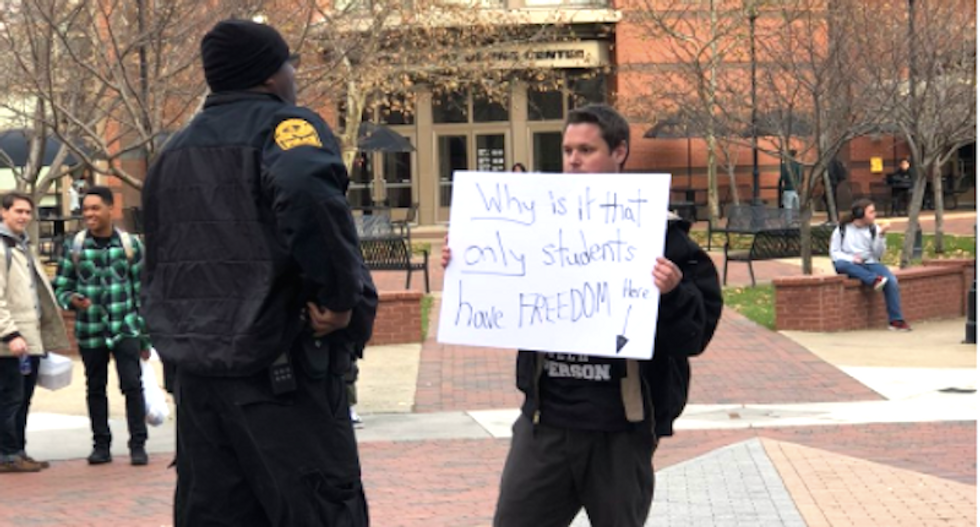 A Virginia man complained after he was arrested for carrying racist signs at a university he doesn't attend.

The 27-year-old Lloyd was soon surrounded by about 200 people, as police stood between him and the crowd.

"You can say what you want, everybody can say what they want," VCU police officer James Malone told the crowd. "I don’t have to like it, nobody here has to like it. If you really want to do something about this, do it the right way. The only thing you’re doing right now is feeding this man’s ego."

Lloyd was enrolled at VCU in 2015, when he studied English literature, but is no longer a student -- although he's earned a reputation as the "sign guy."

“He was just screaming that everybody is racist,” said student Yasmeen Galvez, a first-year student who said she's tried to engage him in a dialogue. “He’s basically inciting a riot each time he comes.”

The campus newspaper, The Commonwealth Times, recently urged students in editorial to ignore Lloyd when he visits campus, which he's been doing for about two weeks.

Campus police asked Lloyd to leave after the large crowd gathered, saying he was "causing a significant disruption to university operations," and he was arrested after refusing to leave.

Lloyd returned later that afternoon with another sign that read, "Why is it that only students have FREEDOM here," and he was arrested again for trespassing.