Roy Moore: Reinstating slavery and taking the vote back from women would 'eliminate many problems' 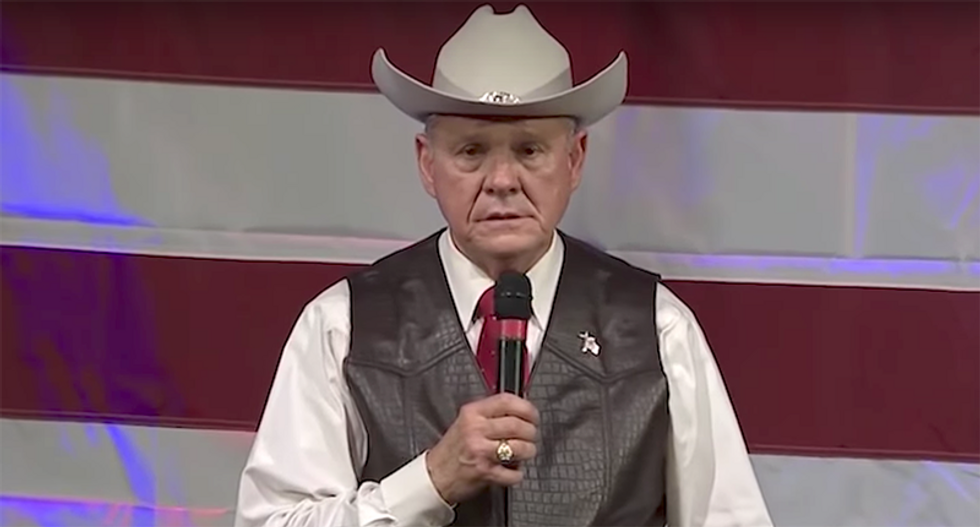 In a 2011 radio interview, ousted Alabama Chief Justice Roy Moore revealed that he fervently wants to move the U.S. back to the 40s -- the 1840s.

CNN's K-File unearthed the audio, in which Moore said that eliminating all Constitutional Amendments after the 10th would "eliminate many problems."

The 10th Amendment -- which passed in 1791 -- enshrined the Bill of Rights into law, stating that any power not given to the federal government is shared between the people and the states.

There are 27 Amendments to the Constitution, the last of which passed in 1992. Among the Amendments Moore would happily do away with are the 13th and 14th Amendments, which abolished slavery and established equal representation. The 19th Amendment gave U.S. women the right to vote.

Moore was guesting on far-right radio show, "The Aroostook Watchmen" in June of 2011, when one of the show's hosts suggested passing an Amendment that would nullify all Amendments from 11 to 27.

"That would eliminate many problems," Moore said. "You know people don't understand how some of these amendments have completely tried to wreck the form of government that our forefathers intended."

One of the hosts said that the U.S. south only reluctantly agreed that slaves should be freed and allowed to enjoy human rights.

"People also don't understand," he said, "and being from the South I bet you get it, the 14th Amendment was only approved at the point of the gun."

"Yeah, it had very serious problems with its approval by the states," said Moore. "The danger in the 14th Amendment, which was to restrict, it has been a restriction on the states using the first Ten Amendments by and through the 14th Amendment. To restrict the states from doing something that the federal government was restricted from doing and allowing the federal government to do something which the first Ten Amendments prevented them from doing. If you understand the incorporation doctrine used by the courts and what it meant. You'd understand what I'm talking about."

"Aroostook Watchmen" host Jack McCarthy is a far-right extremist who spreads 9/11 conspiracy theories and considers himself a "sovereign citizen" who is immune to U.S. laws.

Listen to the audio, embedded below:

Noxious gases from an Icelandic volcano threaten to pollute the air of a nearby village and risk spreading to the capital Reykjavik, the Icelandic Meteorological Office (IMO) said on Friday.

The weather agency said it expected particularly heavy gas pollution in Vogar, a village of some 1,000 inhabitants about five kilometers (three miles) northeast of Fagradalsfjall, the uninhabited valley where the volcano is located.

Trump's new face-off with the DOJ could end up haunting his 2024 bid: analyst

According to CNN analyst Stephen Collinson, Donald Trump's latest squabble with the Department of Justice -- that could drag out for well over a year --could lead to a major setback to his plans to run for president in 2024.

CNN is reporting that the attorneys for the former president are in contact with DOJ investigators looking into the Jan. 6 insurrection, with CNN legal analyst and former U.S. Attorney Preet Bharara explaining, "Actively engaging suggests to me that the lawyers think that there is some jeopardy here and they should engage sooner rather than later," before adding the back-and-forth could continue for months in what Collison called a "curtain raiser to what may well be a critical legal fight over the extent to which Trump -- as an ex-President -- can assert executive privilege over conversations and advice he received while in office."