Tapper slams Trump’s ‘vicious’ FBI attacks: He tries to ‘undermine any institution that pose a challenge to him’ 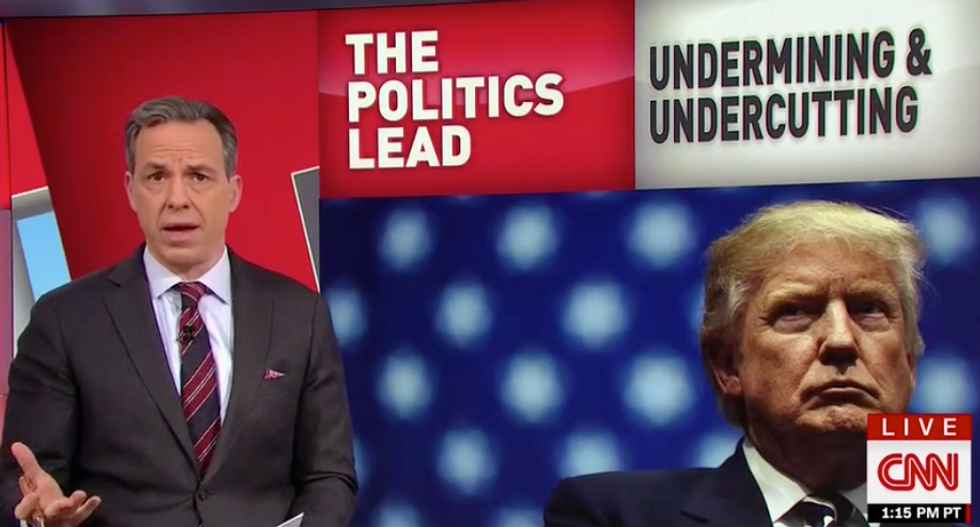 CNN’s Jake Tapper on Thursday took on Donald Trump’s attack on the FBI after director Christopher Wray testified before the House Judicial Committee, fielding pointed questions from Republicans about the independence of the Bureau.

Wray’s testimony came as Trump on Sunday disparaged the chief law enforcement agency, insisting the bureau is “in Tatters.” The FBI director refuted his characterization, as Republicans on the panel sought to undermine Robert Mueller’s special counsel investigation.

“For months, President Trump and allies on the Hill and in the pro-Trump media have sought to undermine any institution that pose any challenge to him,” Tapper explained. “We've seen the attacks on legislative oversight, intelligence agencies, the judiciary, journalists.”

“Currently, this phenomenon is carrying out with vicious attacks on the integrity of federal law enforcement officials,” Tapper continued. “The president's views on FBI investigations are not difficult to predict—when they're of his opponents, he applauds them, as he did in the days rights before election day 2016.”

“Soon enough, Comey was investigating the matters the president did not like, and he was fired,” Tapper recounted. “The current FBI investigation and special council Robert Mueller now under vicious, some might even say ludicrous attacks.”

U.S. Rep. Marjorie Taylor Greene (R-GA) is promising to "take back the House" by endorsing a candidate who is primarying a GOP Congressman in a safely-Republican district in South Carolina. If she's successful and her candidate wins the primary and the November election she will have increased Republicans' hold on the House by exactly zero seats.

"Repubs must take the House back & FIRE Nancy Pelosi in '22," Greene tweeted Tuesday afternoon . "The only way to do that is w/ America First Repubs who fight & not cower in fear like so many spineless RINOs who care more about being liked by the Fake News & their Dem counterparts than they do about America First."

Militia-adjacent Las Vegas councilwoman Michele Fiore is running for governor in Nevada, and her campaign manager helped upend the state's Republican Party by recruiting members of the Proud Boys into its ranks.

Fiore, a former state assemblywoman who backed both standoffs involving the Bundy family and federal agents, announced Tuesday she was entering the crowded GOP gubernatorial primary with a litany of right-wing grievances, reported Nevada Current.

"The next few years will reveal the level of demand for a conservative Republican leader who is not aligned with Trump. Duncan tested those waters at the New Hampshire Institute of Politics on Tuesday night, where he delivered a speech," WMUR-TV reported.