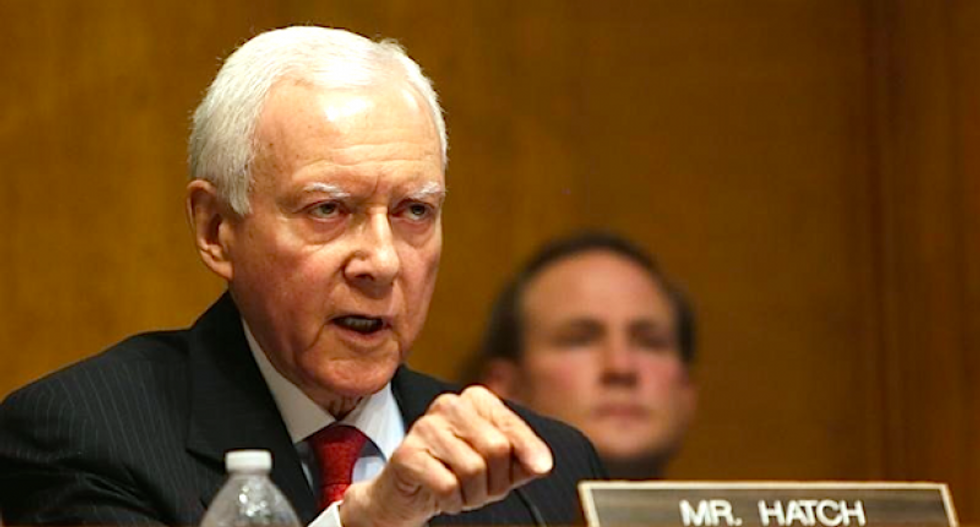 One of the most prominent newspapers in Utah mockingly named Republican Senator Orrin Hatch as "Utahn of the Year," saying he deserved the honor for his stunning "lack of integrity."

In a scathing Salt Lake Tribune editorial posted on Christmas Day, the editorial board claimed the longtime GOP senator had an extraordinary year -- but not for any good reasons.

The editorial began by explaining that, traditionally, the honor goes to "the Utahn who, over the past 12 months, has done the most. Has made the most news. Has had the biggest impact. For good or for ill."

In the case of Hatch, the paper filed him in the "Ill" column.

The choice of Hatch had "little to do with the fact that, after 42 years, he is the longest-serving Republican senator in U.S. history, that he has been a senator from Utah longer than three-fifths of the state’s population has been alive," the paper explained.

"It has everything to do with recognizing: Hatch’s part in the dramatic dismantling of the Bears Ears and Grand Staircase-Escalante national monuments. His role as chairman of the Senate Finance Committee in passing a major overhaul of the nation’s tax code. His utter lack of integrity that rises from his unquenchable thirst for power," the piece ticked off.

"Each of these actions stands to impact the lives of every Utahn, now and for years to come. Whether those Utahns approve or disapprove of those actions has little consequence in this specific recognition. Only the breadth and depth of their significance matters," it continued.

The paper then urged Hatch to finally step aside.

"Over the years, Hatch stared down a generation or two of highly qualified political leaders who were fully qualified to take his place, Hatch is now moving to run for another term — it would be his eighth — in the Senate. Once again, Hatch has moved to freeze the field to make it nigh unto impossible for any number of would-be senators to so much as mount a credible challenge. That’s not only not fair to all of those who were passed over. It is basically a theft from the Utah electorate," the board wrote. "It would be good for Utah if Hatch, having finally caught the Great White Whale of tax reform, were to call it a career. If he doesn’t, the voters should end it for him."