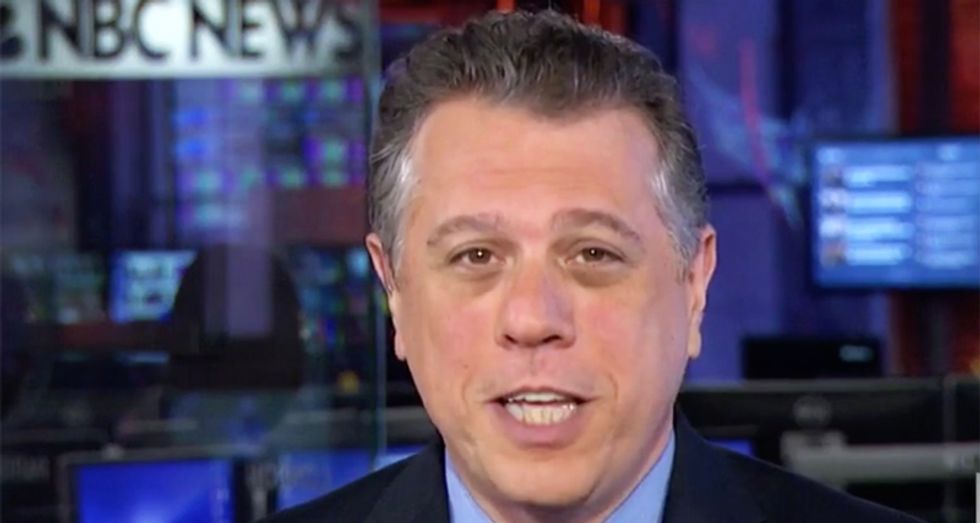 Appearing with MSNBC's Alex Witt, two legal analysts marveled and laughed at a President Donald Trump's Saturday tweet that they claim could be used as an admission of guilt that will be used by special counsel Robert Mueller in a obstruction case against the sitting president.

Saturday afternoon, Trump tweeted, "I had to fire General Flynn because he lied to the Vice President and the FBI. He has pled guilty to those lies. It is a shame because his actions during the transition were lawful. There was nothing to hide!"

According to Brennan Center of Justice President Michael Waldman and MSNBC legal analyst Danny Cevallos, Trump's tweet may come back to haunt him since presidential tweets are accepted as official statements.

"Do you think the president just admitted knowing Flynn was lying at the time of the firing or is there some wiggle room here knowing how the president can be loose with his wording when it comes to his tweets?" Witt asked, before adding, "But if it were true, would that qualify as obstruction?"

"It's interesting for exactly the reason that you pointed out -- timing," Cevallos explained. "Section 1001 requires that the person making the statement knowingly make a false statement. So Trump's tweet about the fact that Flynn lied to the vice president and lied to FBI agents raises the question of whether or not he knew he lied at the time -- whether or not Trump was aware he lied at the time -- because then Trump could be read as saying there was nothing wrong. No one did anything wrong except that Flynn lied to FBI agents, which we know from the false statement statute is itself a crime. So read that way, Trumps tweet makes no sense. Read another way, it's arguably okay."

Waldman had a slightly different take.

"I think Donald Trump is going to regret that Twitter expanded to 280 characters giving him more room to confess to obstruction of justice in his tweets," Waldman quipped. "Let's look at the big picture. He just said that Michael Flynn lying to the FBI was one of the reasons he fired him. Now broaden the time horizon. He then asked the then-director of the FBI to drop the investigation, and then he fired the director of the FBI."

"We don't know where the criminal probe will go," Waldman continued. "There are limits to where any criminal investigation can go in terms of all of the facts, but this should put to rest the idea that, 'Hey, this is all fake news. This Russia thing is a setup as the president has been saying.' It really underscores that -- we know there was collusion, the question was, was there criminal acts involved in the collusion of then and now from the president's own itchy Twitter fingers, we now have of obstruction."

"So, Danny, at this point you have Flynn, certainly the prosecution's star witness, there's no denying that," Witt pressed. "But having pled guilty now, Flynn is admitting he's a liar. So what does that do in terms of his credibility as a witness? Could that in any way be used against him?"

"It absolutely will be used against him,"Cevallos answered. "This is Cross Examination 101, and actually it's no surprise to the prosecution. This is the case in every single prosecution in which the U.S. Attorneys enter into a cooperating witness agreement because for many millennia, prosecutors have realized to catch a criminal, you often have to get information from a criminal."

"Yes, the prosecution is getting vital information about their prosecution, but it's coming from the mouth of what is usually a convicted criminal with credibility problems. Particularly so when your star witness has been convicted of a crime of falsity," he added.