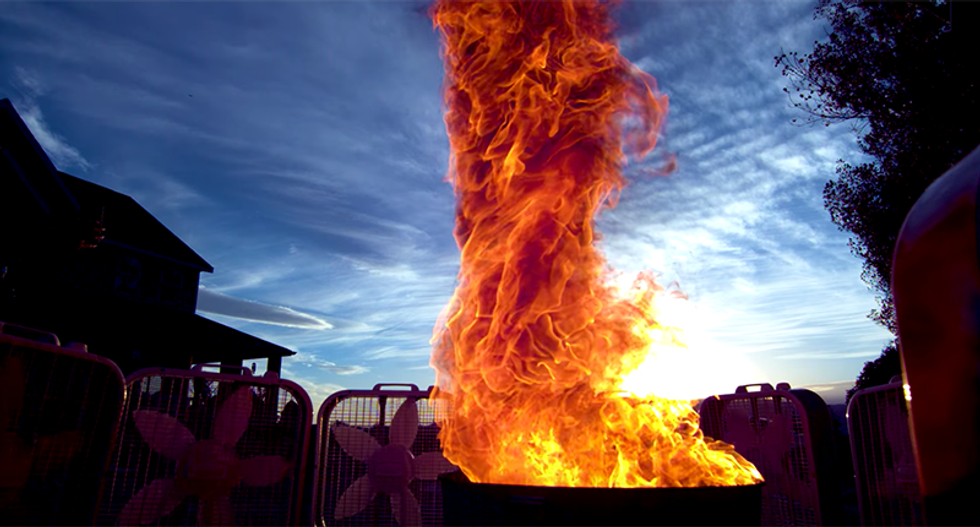 Cinematographer Darren Dyk set up a ring of box fans to move the air around a fire pit. The result was a fire-tornado.

The high-speed slow motion film expert then captured the video of the way the fire moved. Fire tornadoes are also referred to as fire whirls or fire devils and have been seen in parts of Australia while brush is burning. A dust devil, which is a long-lived whirlwind and not a weather-related tornado, creates a column of dust. When it travels over the brushfire the fire travels up the wind of the whirlwind.

In Australia, the 2003 Canberra bushfires stumped experts who couldn't understand how the fire was able to travel as quickly as it did. An investigation of the aftermath reported cars that were on roads at the time but were picked up and placed in ditches. Trees were uprooted and homes sustained both wind and fire damage. One forested area had tree trunks that were not only burned but a clear path of flattened trees could be seen while others stood around it.

It was concluded that a fire-tornado was likely the culprit. It was the first documented case of such a weather phenomenon ever occurring in science. Scientists thought that the terrain caused variances in wind temperature, which could have caused the storm within the fire.

Dyk traveled to Utah to film his manufactured fire tornado against several backdrops to experiment with the best possible way to film it. He and a friend then sent plastic toys through the fire that looked like an action movie scene.