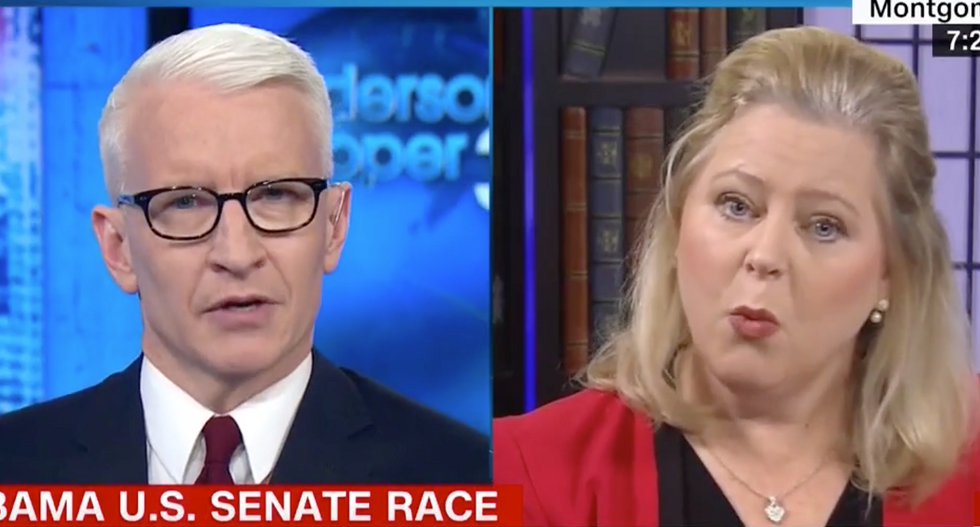 In a confrontational interview on Wednesday, CNN’s Anderson Cooper cornered Roy Moore’s spokeswoman Janet Porter over the candidate’s past positions—of which she seemed to know little about.

“Your campaign has blamed an awful lot of people for allegations against Moore,” Cooper told. “Can you just explain to me how all these people got together?”

Porter compared it to a “lynch mob” and argued, “what the establishment does is make false allegations” against candidates they don’t like.

"So you're from Ohio, right?” Cooper asked at one point. “So why is it okay for you to come in from Ohio and tell the people of Alabama how to vote when you go after George Soros and anyone else who's not from Alabama claiming their outsiders? Are you just as much of an outsider as the Washington Post?”

After Porter repeated that she’s in Alabama because of the “culture wars,” Cooper pressed her on a number of past statements Moore has made. Porter seemed unable to comment on the majority of Cooper’s questions.

“Does Judge Moore still believe that homosexual conduct should be illegal and homosexuality is still the same thing at beastiality?” Cooper asked.

“I can't answer that question," she replied.

“Can you get back to me on whether or not he believes homosexuality should be illegal?” Cooper asked as Porter claimed Moore “believes the Bible and what the Bible has to say.”

“If you don't want to answer, that's fine. But can you get back to us?” Cooper pressed.

“I don't know the answer, no,” Porter finally admitted.

“Does he still believe an American citizen who's a Muslim should not serve in Congress?” Cooper wondered.

“I think that what he's getting at there is we believe in the rule of law by the Constitution, not Sharia Law,” she said.

“You're the spokesperson and you seem unwilling,” Cooper later lectured Porter. “I know you're not from Alabama, but you seem not to know what his positions are.”