WATCH: FBI-smearing Republican bristles after CNN's Camerota shuts him down with his own words 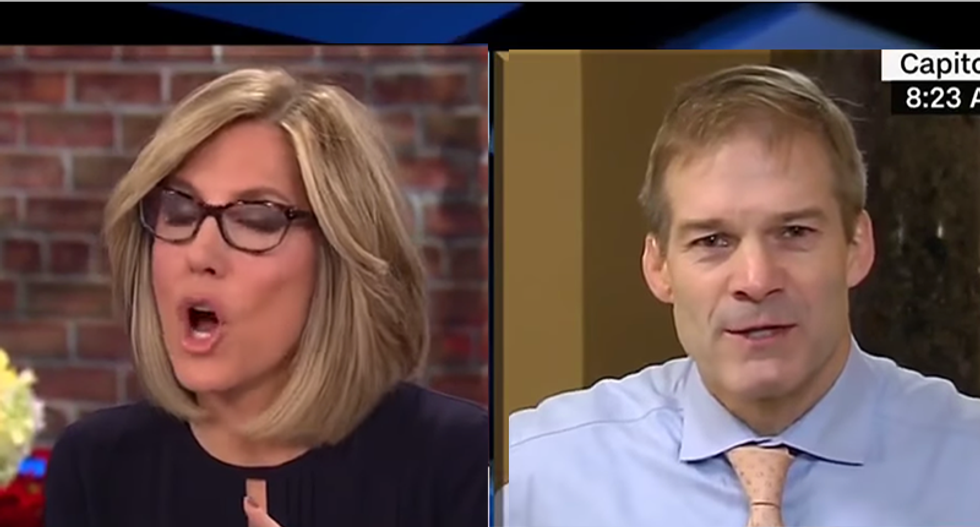 CNN's Alisyn Camerota took on a very combative Ohio Republican on Friday morning as he attempted to smear the FBI's  attempts to investigate the administration of Donald Trump, with the news host having to call the lawmaker out by citing his own words during a Congressional hearing on Thursday.

Addressing President Trump's assertion that the FBI -- which is interrogating dozens of White House employees over Russian collusion -- is in "tatters," Camerota asked Rep. Jim Jordan (R-OH) how he views the agency from his perch on the House Judiciary Committee.

"I think lots of people question it, particularly as it relates to the entire Clinton investigation and the Russian matter, so that's where my focus is," Jordan stated, adding that he has reservations about the FBI's management at the top.

Jordan then began a two-pronged assault on the FBI, attacking the so-called "Steele dossier" while also claiming that an FBI investigator who was pulled off the Russian investigation by special counsel Robert Mueller may have tainted both investigations because he had sent anti-Trump texts.

"You are painting the Mueller investigation with one broad brush stroke, and we know there are Democrats and Republicans on that team," host Camerota shot back.

After Jordan called the dossier discredited, the host lectured him, saying, "It has not been discredited. It has been corroborated," Jordan snorted and said, "Really?"

"Yes, ask your intel community," the CNN host replied. "Your intel communities have corroborated all the details. The conversations, the face-to-face meetings between the Trump team and the Russians. And the only part you are focusing on is the stuff we have not reported on."

"No, I am talking about the whole thing," the bristling Jordan argued. "The FBI reported they were paying Christopher Steele to put together an opposition research document that the FBI, I believe, dressed up and took to the FISA court so they could spy on the other party's candidate and campaign. That's what I think happened."

"Yeah, but you don't have any basis for that. That's your hunch," Camerota stated.

"Are you kidding me?" Jordan complained

"You called it your hunch," Camerota said, reminding the lawmaker of his own words when he publicly interrogated FBI Director Christopher Wray on Thursday. "You said it, 'this is my hunch.'"

"And the FBI could prove i am wrong if they would show us the [FISA] application," the nonplussed lawmaker offered.