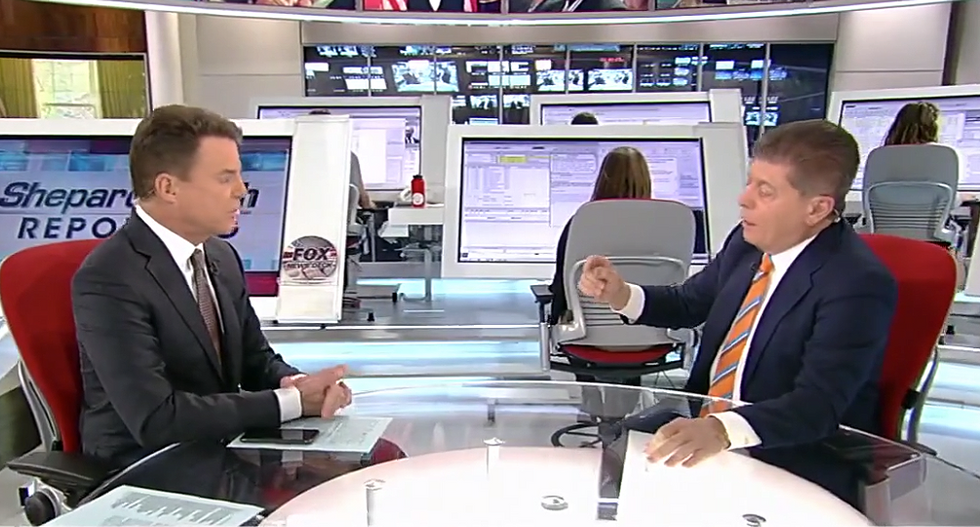 Smith and Napolitano were discussing reports that Peter Strzok, the FBI agent removed from Mueller’s investigation for political bias, “changed a key word, or series of words, in former FBI director James Comey’s statement on the Hillary Clinton email investigation.”

“The cry is that the wording was changed, and this changes everything,” Smith said.

“Okay, we’re talking about the wording in a public statement that then-FBI Director Jim Comey made about whether or not the FBI thought Mrs. Clinton should be charged with espionage,” Napolitano explained adding that same agent “sent some texts to his girlfriend … and in those texts he was either critical of the president or praiseworthy of Mrs. Clinton.”

“No, it should not matter,” Napolitano explained. “Because when a document is prepared, like the one from which Jim Comey read, which was of profound significance … a lot of people have their hands in there suggesting language to the director.”

“The director of the FBI doesn’t release anything other than, ‘hello, goodbye, see you tomorrow’ without a number of people looking at it because it might become scrutinized by a court someday,” the judge added.

Referring to reports that Strzok also conducted the interview of onetime Trump national security adviser Michael Flynn, during which Flynn allegedly lied to the FBI, Napolitano once again denied the significance of that development.

“That interview, the transcript of that interview, was scrutinized by at least a half-dozen other agents and by the 13 lawyers in Bob Mueller’s office, and they decided it was a lie,” the judge said. “It didn’t matter who asked the question. The crime is lying to the FBI, not lying to Mother Theresa, the FBI agents don’t have to be clothed with absolute perfection in order to do their jobs.”

“So you’re saying there’s no ‘there’ there, at all?” Smith asked

“There’s no ‘there’ there,” Napolitano concurred.

Asked by Smith why Mueller reassigned Strzok, Napolitano explained, “sometimes you want to deflect criticisms before the criticism comes.”

“So this is not a thing?” Smith pressed.

“I don’t think it is,” Napolitano replied. “The question is what evidence does Bob Mueller have.”