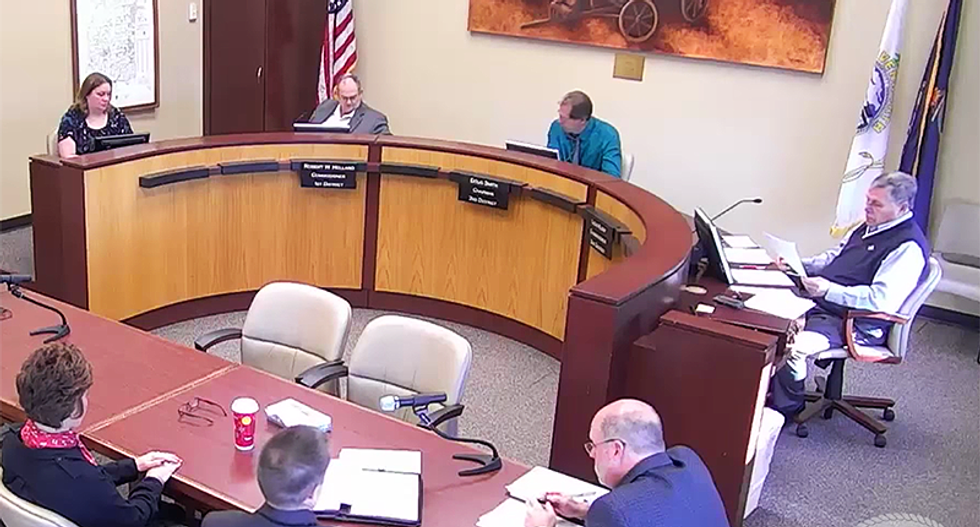 A Leavenworth County official went off on a bizarre racist rant during a debate about the holiday schedule during a County Commission meeting last week. Now, his colleague is calling for his resignation.

According to KSHB, County Commissioner Louis Klemp appeared to relate the holiday schedule to the Civil War monument protests.

"I keep waiting, I didn't see Oprah on there, she's not on there as a federal holiday," Klemp said. "Well, Martha Stewart was the first billionaire so maybe she ought to be on there instead of Oprah."

He then went on to attack the lack of U.S. presidents who have holidays and specifically cited Robert E. Lee.

Klemp also blamed African Americans for not liking Abraham Lincoln because he allegedly moved too slow after emancipation of the slaves to do more.

"We're gonna get rid of Jefferson and his memorial," Klemp continued. "Because there's a group of people out here."

He then explained that he learned a lot about George Washington in grade school and junior high but that no one studies him beyond that. The same is true for Lincoln, according to Klemp. "Because the other side didn't win."

He explained that the conversation about the official calendar for 2018 should have taken less than a minute, instead Klemp turned it into an 8-minute diatribe.

"I would like to see a violation of some kind brought against him and he be removed from office," Holland continued.

KSHB interviewed Leavenworth native Thomas Rodriguez and showed him the video and couldn't make sense what Klemp was saying.

"I don't understand what he is thinking about George Washington I mean he's in there with Presidents Day, I don't know why he would bring up Oprah either," Rodriguez said. "It doesn't infuriate me or anything. I just didn't quite understand what he wanted."

Klemp was chosen to takeover the position by Republican Party precinct captains from the second district when longtime County Commissioner Clyde Graeber resigned due to health reasons.

Watch the full report with the entire commissioners meeting below:

The full County Commissioner meeting is below - the conversation begins at about the 55-minute mark: