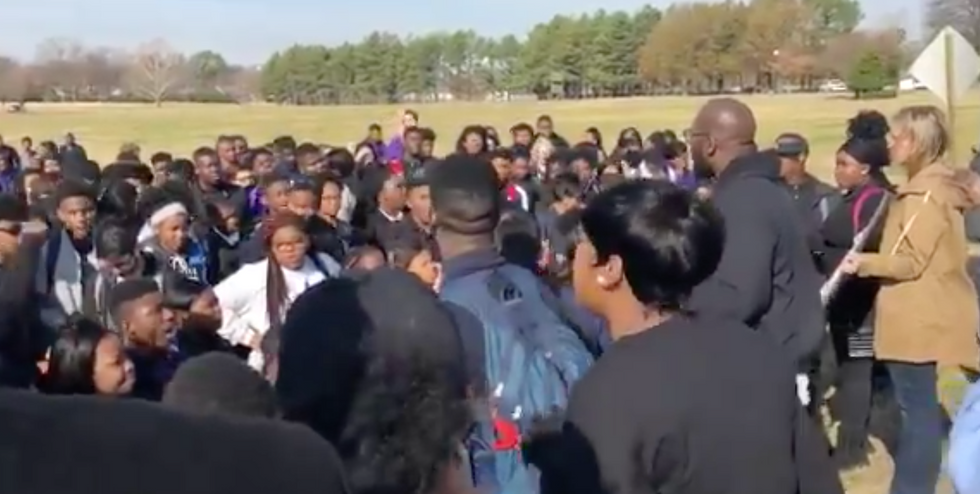 Students, faculty and teachers protest outside of Haywood High School in Brownsville, TN after student athletes made racist threats against black classmates. Image via screengrab.

Students at Brownsville, TN's Haywood High School walked out of their classrooms in protest on Monday after members of the school's baseball team allegedly made racial threats toward black students.

According to Memphis' WREG, roughly 200 students participated in the protest, and many expressed shock that classmates they saw every day held such bigoted beliefs.

Student Malik Green, who helped organize the walkout, said he was "speechless" when he saw Snapchat screenshots of students he knew claiming they would "string a n*gger up."

"Today we all come together to fight against racism," Green told WREG. "We just can't stand for it anymore and we needed to take action."

Green also claimed the students involved in the racial threats were let off easy by administration, who only required they write a 10-page paper as punishment.

"They tried to sweep it under the rug," Green said.

Though there's been no confirmation of Green's allegation, Haywood County Schools released a statement saying that they were cooperating with police, but that no criminal charges would be brought against the students.

"I have also been in communication with Chief Diebold and he has consulted with the District Attorney's office on the content of the message," Haywood County Schools Superintendent Joey Hassell wrote on the district's Facebook page Sunday. "Based on review of the DA's office, it is my understanding that there will be no criminal charges; however, the school district will review the findings of the HHS investigation and determine what actions will be taken. A thorough review will occur."

Watch video of the protest below.