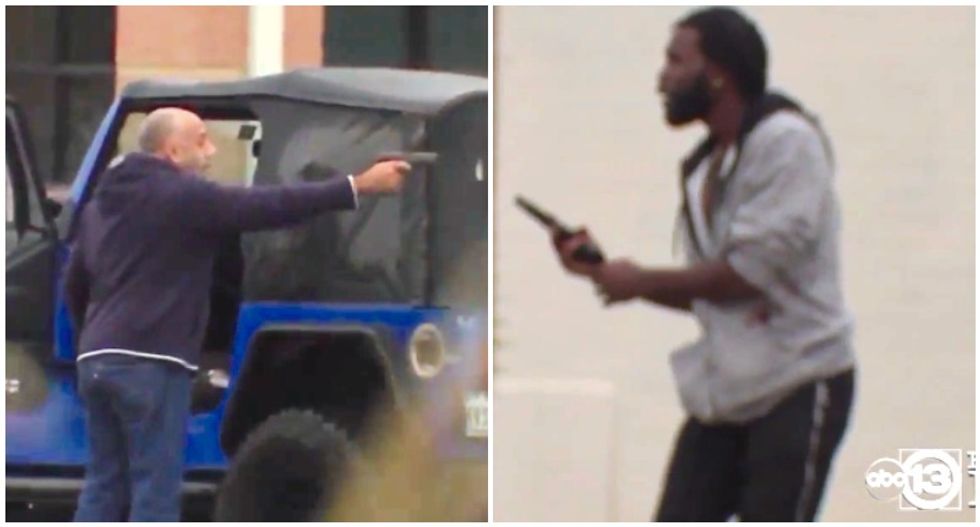 A TV news crew found themselves in the middle of breaking news -- and a potentially life-threatening situation -- while out covering another story.

Reporters and photographers for KTRK-TV were working out of a parking lot Wednesday afternoon in Houston when they witnessed a road rage incident that turned into a shootout.

A man driving a sedan had wrecked into the rear of a Jeep, and the drivers of each vehicle had gotten out and drawn guns.

They started shooting at each other across traffic at the intersection of Westheimer and Kirkwood Roads.

"I saw one man with a gun not 20 yards from me, and he was shooting his gun in all directions," said witness Annie Ranck, who called 911. "I flashed my lights at other drivers. I wanted to warn people about what was happening."

Garcia started recording just after the last shot was fired, but he caught the men waving their weapons and shouting threats.

"I hit the ground behind our truck," said reporter Erica Simon. "I called my husband to let him know where his wife was in case something happened."

She spotted a woman who had been grazed by a bullet in the head, and she was bleeding from the wound.

"We tried to comfort her as best we could, and let her know an ambulance was on its way," Simon said. "A good Samaritan, an EMT, was applying pressure to her head to stop the bleeding."

She was treated at a nearby hospital, and police said one of the gunmen was shot in the chest but continued to threaten the other driver.

Both men were arrested, and the wounded driver was hospitalized with a gunshot wound.

"It was crazy," Garcia said. "If you get into an accident, call the police, or drive to a gas station to wait. Don't start shooting at each other. A bystander who had nothing to do with this was injured, and it could have been even worse."

The woman shot was an innocent bystander. She was grazed in the head but has since been transported to the hospital… https://t.co/vOMDXFqsu4
— Erica Simon (@Erica Simon)1512595121.0