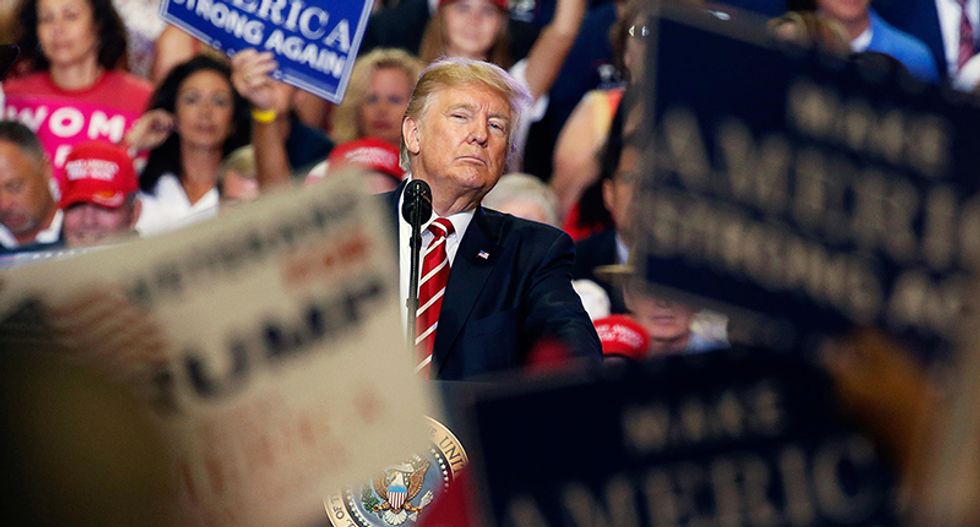 Welcome to another edition of What Fresh Hell?, Raw Story’s roundup of news items that might have become controversies under another regime, but got buried – or were at least under-appreciated – due to the daily firehose of political prank falls, unhinged tweet storms and threats of nuclear annihilation coming out of the current White House.

Remember candidate Trump, the populist? He said that he didn’t need to bow to powerful special interests because he was already rich, so he would fight for the little guy. He was going to make coal great again, and bring jobs back to white people in towns that had once enjoyed vibrant, bustling main streets but as a result of NAFTA now have only an opioid bar and a couple of used condom stores. He railed against Wall Street. He attacked both Ted Cruz and Hillary Clinton for being too close to Goldman Sachs.

So how’s that working out?

Well, he surrounded himself with Goldman Sachs alumni – Sen. Elizabeth Warren (D-MA) quipped that he had so many Goldman people the firm could open a new branch in the West Wing – who helped write a tax bill that would save the firm around $1 billion in taxes as well as putting more than that into the Trump clan’s own pockets.

That was widely reported, as were various other ways the bill would screw over Trump’s working-class supporters. But two provisions that speak directly to Trump’s populist shtick may not have gotten the attention they deserve. First, Steven Rosenthal, a fellow at the Tax Policy Center, explains that the biggest winners in the Senate bill, which still has to be reconciled with the version passed by the House, would be foreign investors. 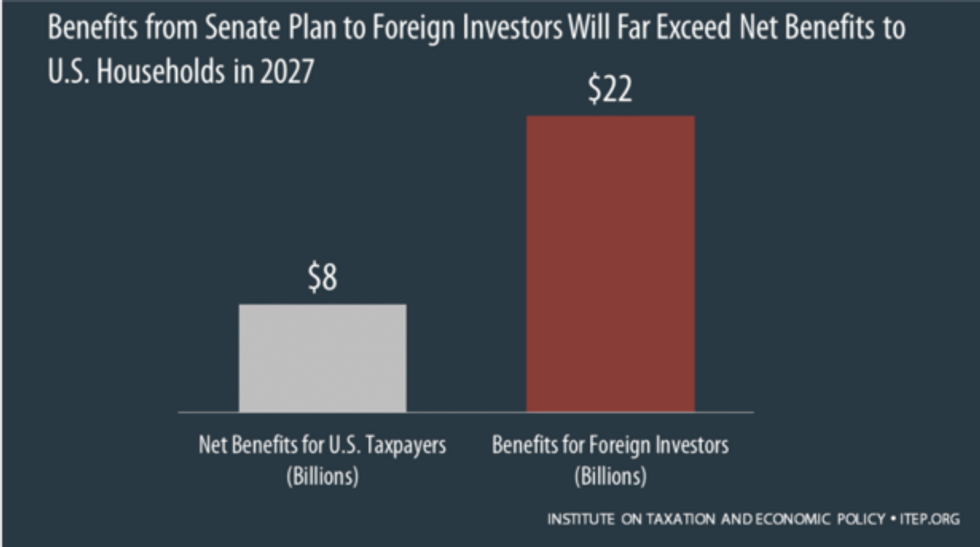 And then there’s another provision that allows companies to write off the entire cost of buying a machine or robot to replace a worker right away, which MIT economist Daren Acemoglu translates into "a huge handout from the government." Populism!

The populists of the late 19th century railed against railroad companies and banks and trusts controlled by big-city elites. The 1892 People’s Party platform called for eliminating national banks entirely.

On the campaign trail, Trump said, “Wall Street has caused tremendous problems for us. I’m not going to let Wall Street get away with murder.” But now that he’s in office, his brand of populism seems to champion those same banks as the little guys, and promises to protect them from predatory regulators.

Toward that end, we should pause to appreciate just how hard Mick Mulvaney, Trump’s pick to serve as the interim director of the Consumer Financial Protection Bureau (CFPB), is fighting to defend their right to rip you off.

Last year, Wells Fargo, which Bess Levin calls “the Usain Bolt of ripping off customers,” came to a settlement with the CFPB to pay 100,000 customers tens of millions of dollars for charging them unnecessary fees to lock in their mortgage rates. But Mulvaney put a hold on the settlement, and is currently reviewing its terms. He also reversed the agency’s position on cases involving three other financial firms that lied to or defrauded their customers, and Reuters reports that “a dozen other [cases] are in question now that Mick Mulvaney… has said he is reviewing the CFPB’s prior work.” He’s been in charge for less than two weeks.

Mulvaney, a former Rep. from South Carolina, has repeatedly trashed the agency he now leads. And David Sirota reported this week that when he was in Congress, he frequently urged the CFPB to back off of enforcement actions while his campaigns were being bankrolled by predatory payday lenders.

You may recall that Mulvaney took over the agency in a sort of administrative coup d’etat after Former CFPB director Richard Cordray quit. The law stipulates that an outgoing agency head can appoint his or her interim successor until Congress confirms a permanent replacement. Cordray did just that on the way out, tapping his deputy, Leandra English, to run the show. But the Trump regime, citing a different law, just sent Mulvaney over to take control even though he already has a job as Trump’s budget director. English sued, but a federal judge whom Trump had appointed two months earlier sided with the regime.

That legal fight isn’t over yet, and it could work its way up to the Supreme Court, where Neil Gorsuch might provide the deciding vote!

The Trump regime took steps this week to repeal an Obama-era rule that regulates tip-pooling at restaurants and bars and other businesses with tipped workers. That’s when they collect everyone’s tips together and split them up with non-tipped workers, like kitchen staff. Fine and good, but economist Heidi Shierholz at the Economic Policy Institute points out that, “under the administration’s proposed rule, as long as the tipped workers earn minimum wage, the employer can legally pocket those tips. And what we know for sure is that, often, they will do just that.” Nothing says populism like letting bosses rip off your tips.

Meanwhile, the Federal Emergency Management Agency (FEMA) told its staff that because they’ve gone through been such a tough year, they might get a bill in 2018 for working too hard.

Josh Eidelson reports for Bloomberg that federal law allows agencies to “recover” overtime pay that exceeds a certain annual cap. With so many disasters this year, a number of FEMA employees have blown right past that limit, and the agency informed them that not only might they have to work more overtime “without receiving further compensation,” but they’ll get an invoice for any pay over the cap that they got in their paychecks this year.

The agency says this is federal law and there’s nothing they can do about it, but a “different law grants it the discretion to waive the requirement that a particular employee pay back the excessive compensation,” according to Eidelson. Also, Congress could just waive the cap for FEMA workers, as they’re already in the process of doing for the Secret Service personnel who have been burned out guarding Trump as he jets back and forth to his tacky resorts.

And while climate change is just a Chinese plot to undermine capitalism and is in no way related to the natural disasters we’ve experienced, it’s at least worth noting that earlier this week, the Trump regime “terminated a cross-agency group created to help local officials protect their residents against extreme weather and natural disasters,” and that the move was just “the latest in a series of federal climate-related bodies to be altered or terminated since President Donald Trump took office.”

Of course, the government isn’t made of money. Did we mention that Interior Secretary Ryan Zinke spent $6,250 in tax-payer funds on a helicopter ride from Virginia to DC in order to get back in time to go horseback riding with Vice President Mike Pence? Now consider how much you’d pay to get out of riding with Mike Pence?

They say that personnel is policy, and on the stump, Trump vowed that he would hire only the best people. Here’s a story about an appointment to a relatively obscure government position that’s nevertheless emblematic of a trend in this regime: Hiring right-wing wackjobs with a history of extremely offensive behavior and putting them in somewhat sensitive positions.

Meet Patrick Murray, a twice-failed House candidate whom Trump nominated to serve as a high-ranking official under UN ambassador Nicki Haley. Among other things, Murray, if confirmed by the Senate, “would act as a fill-in for Haley in representing the US to the United Nations General Assembly when she is unavailable.”

According to CNN, Murray, who lists his vocation as “writer and commenter” and has no obvious qualifications for the job, is a big fan of Milo Yiannopoulos. And he appears to have devoted an unhealthy amount of time to “shar[ing] the kind of provocative political memes that were popular among supporters of Trump during the election.” These included such popular wingnut themes as African-Americans are lazy race-baiters who victimize cops, Muslims are bloodthirsty savages who kill “anyone who doesn't have their bum in the air five times a day," and transgender people are gross.

So that’s who will represent America and her values when Nikki Haley isn’t available. Let’s hope Nikki Haley remains available as much as possible.

Relatedly, the Associated Press reported this week that 60 percent of Trump’s picks to fill “jobs dealing with complex science, environment and health issues… did not have a master’s degree or a doctorate in a science or health field.

“This is just reflective of the disdain that the administration has shown for science,” said former New Jersey governor Christie Todd Whitman, who served as EPA chief and is one of the last of a dying breed of GOP moderates.

Sometimes, the Trump regime just leaves you scratching your head. We get that he’s obsessed with doing the opposite of whatever his predecessor did. Obama expanded insurance coverage to 22 million people, and Trump celebrated a bill that would have stripped it from 24 million. Obama cut a deal to reduce global warming, Trump pulled out of it. Obama said that his foreign policy doctrine could best be described as “don’t do stupid shit,” and this week Trump set the Middle East ablaze by recognizing Jerusalem as Israel’s capital – possibly to fire up white Evangelicals in Alabama so they’ll go to the polls this week and vote for an alleged child molester.

But what are we to make of Trump scrapping an Obama-era rule requiring airlines to tell customers that they’ll have to pay a fee to check their baggage? Who benefits from this? Not the airlines – they’re “already required to disclose information about optional service fees on their websites.” Is it just a big fuck you to the consumer groups that “say it’s still difficult for passengers to compare airfare ticket prices, fees and associated rules, and have pushed for more transparency at the start of the process”? Maybe!

In any event, The Hill also reports that the regime is killing an Obama-era rule that required airlines to disclose how much they make by nickel-and-diming you for everything from checked luggage to a little bag of stale peanuts. Way to look out for the little guy.