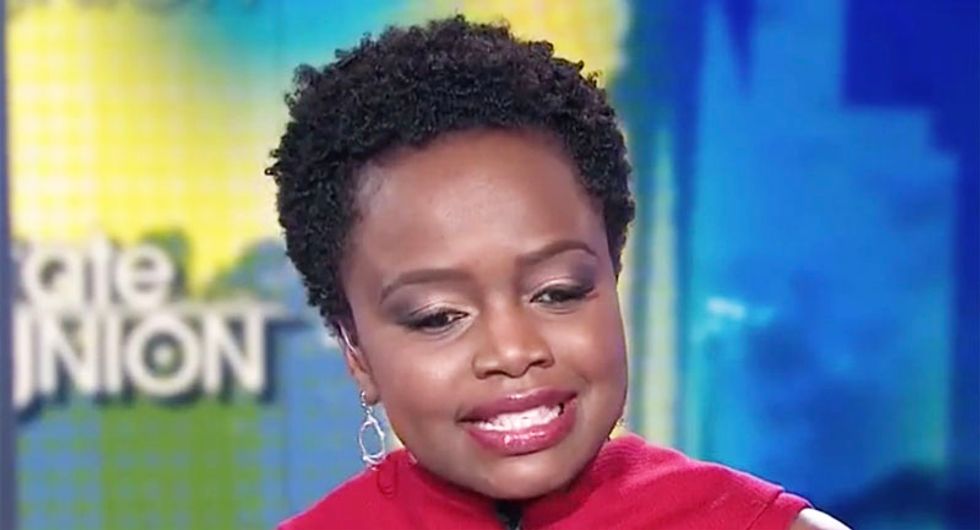 After spending a great deal of time attempting to malign Special Counsel Robert Mueller's investigation into Russian collusion with President Donald Trump's campaign staff, a former Trump aide got a lesson on the law when he complained about transition emails obtained during the investigation.

Along the way, one CNN pundit shut him down with a pithy shot at the White House.

Appearing on CNN's State of the Union with host Jake Tapper, ex-Trump staffer Michael Caputo sneered at the bombshell report that Mueller has obtained transition emails that were kept on a General Services Administration server after the election which Trump officials mistakenly believed were private.

"These are transition lawyers, they're talking about a commitment the GSA made to them that they would consult with them if they asked for any of the documents," Caputo attempted. "There is an argument they're are private property, even though they're held by GSA. The fact of the matter is these e-mails and documents were released -- surprise, surprise -- by career bureaucrats at the GSA. This is more of an administrative attack on President Trump. I think there is an indication that the Mueller investigation is off the rails."

As Caputo railed at the Mueller investigation for acquiring the emails, calling it a "partisan attack on Trump," former Obama official Jen Psaki stepped in to straighten the Trump defender out.

"What this is about is whether the sitting president of the United States worked with a foreign adversary to rig the election and then covered it up," Psaki explained as Caputo attempted to talk over her, exclaiming, "Zero proof, zero indictments, zero guilty pleas, zero on Russia. There is nothing on Russia, everything is a process."

"Let me just finish and make one more point," Psaki shot back. "I worked on a presidential transition. Your e-mails are government property. This is totally fake, made-up conspiracy-driven thing. This is not real."

"Also a lot of the content of the e-mails is gossip about senate nominees, Mueller doesn't care about that," she said as Caputo finally fell silent. "Let's get back to the focus of whether the sitting president of the United States worked with Russia to rig the election and then covered it up. That's the big question. who cares about all this other stuff?"

Political adviser Karine Jean-Pierre got in the last word with the Trump supporter with a biting assessment.

"And honestly, if you're looking at the White House versus Mueller, who are you going to believe?" she asked. "The White House can’t put together a sentence without lying.”