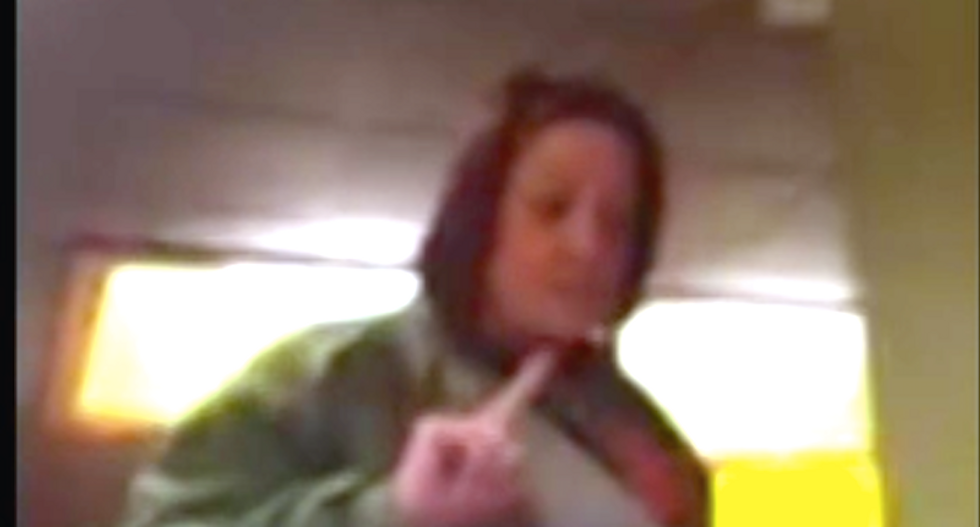 A woman hurled racist abuse at a group of black teenagers at a Denny's restaurant -- and employees did nothing to stop her.

One of the teens recorded video of the Nov. 26 encounter at the St. George, Utah, restaurant, where they were eating a few tables away from the woman, reported The Spectrum & Daily News.

The woman accused the teenagers of laughing at her, and she called them "f*cking n*ggers" and threatened to harm them.

"All it takes is a couple of n*ggers to cause problems," she says in the video. "This is America -- I can say whatever the f*ck I want."

Jordan Jones, one of the teens in the video, said the encounter was baffling.

"We don't know what provoked her or why she thought we were laughing at her," Jones said. "We never spoke to her or even looked at her directly."

He said the woman then left but stopped at the front of the restaurant and glared at the group of four through a glass door.

One of the Denny's employees then approached the teens and asked whether the woman was bothering them, but then walked away.

The woman came back and continued ranting at the black teens.

Jones was troubled the manager did nothing to defuse the situation, and he said other customers remained silent.

"They could have done number of things," Jones said. "The employee said the manager thought it was funny."

Jones was certain police would have been called if the situation were reversed, and he or his friends had verbally harassed the white woman.

"It makes me feel like I can't go into a restaurant and eat and feel OK without being assaulted because someone doesn't like my race or that their race is superior to mine," he said. "What next? She already threatened my life."

Denny's has long been accused of racial discrimination.

The national restaurant chain settled a class-action lawsuit in 1994 for $54 million to thousands of black customers who had been refused service or had been forced to wait longer or pay more than white customers.

Over the next decade, the company instituted new policies that earned the "Best Company in America for Minorities" distinction by Fortune magazine.

The franchisee who owns the St. George restaurant said he was "shocked and disturbed" by the woman's outburst.

“At Denny’s, we highly value diversity and inclusion and do not in any way condone or accept this type of behavior and language," said franchisee Wes Cooper. "We are dedicated to providing a welcoming dining environment for all our guests and in this instance, a server stepped in to confront the abusive customer and asked her to leave the restaurant. While we can’t predict or control an individual’s behavior, we do apologize and regret that our guests had to endure this customer’s inappropriate behavior, and have taken immediate steps to ensure staff members understand and follow the Denny’s process for managing these types of situations.”