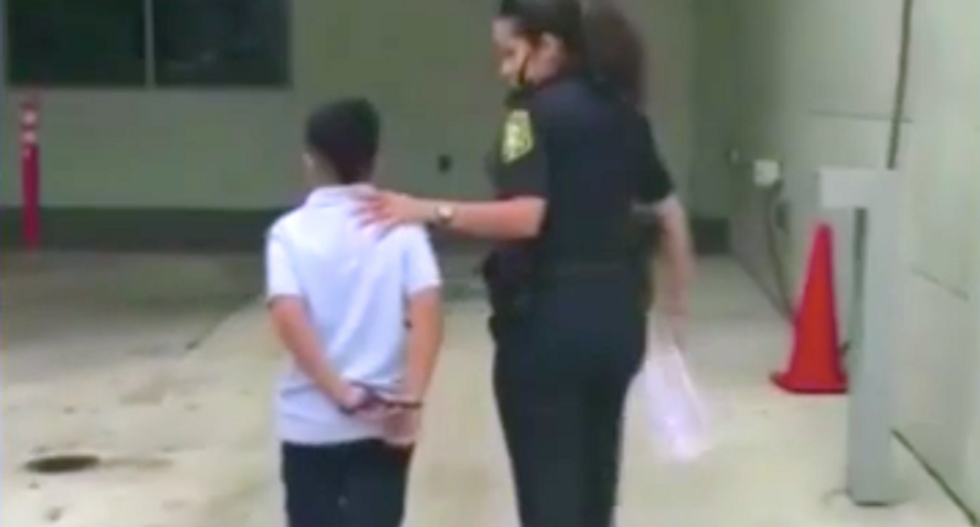 Police handcuffed a 7-year-old boy this week after he struck a teacher at his Miami elementary school.

Cellphone video shows the boy being led away from school Thursday in restraints following the altercation, and his parents are upset by the school's handling of the situation, reported WSVN-TV.

The incident started when the boy was removed from the cafeteria at Coral Way K-8 Center for playing with his food, and police said he repeatedly punched the teacher in the hallway.

The child was then restrained by a school resource officer, but police said he continued to strike the woman with his fists and legs, and both of them fell to the ground.

The boy grabbed the teacher's hair after they fell down, and the officer again restrained him.

The child was eventually calmed down and taken to the principal's office, but the teacher told police she wanted to press charges.

The boy's parents said they met with the principal and counselors and agreed their son would be suspended for 10 days, but police said they had to arrest the child or take him for a psychiatric evaluation.

His mother, Mercy Álvarez, said the boy was accused of kicking a teacher after a scolding in November, but a psychologist found no mental health issues.

“He does not have a mental disorder,” Álvarez said.

The parents believe their son is being bullied at school, and they do not believe the child is strong enough to knock down his teacher.

The first-grader was detained under the Florida Mental Health Act (Baker Act) and then hospitalized without his parents' consent, but he was discharged hours later.

“This action was warranted to prevent his erratic and violent behavior from bringing further harm to others or himself," said Miami-Dade Schools Police Ian Moffett. "The manner in which he was transported to the receiving facility was done in accordance with Standard Operating Procedures."

The boy's mother said the same officer was involved in each incident, and she said he no longer hoped to be a policeman when he grew up.

“he told me he does not want to be because the police are bad," Álvarez said.