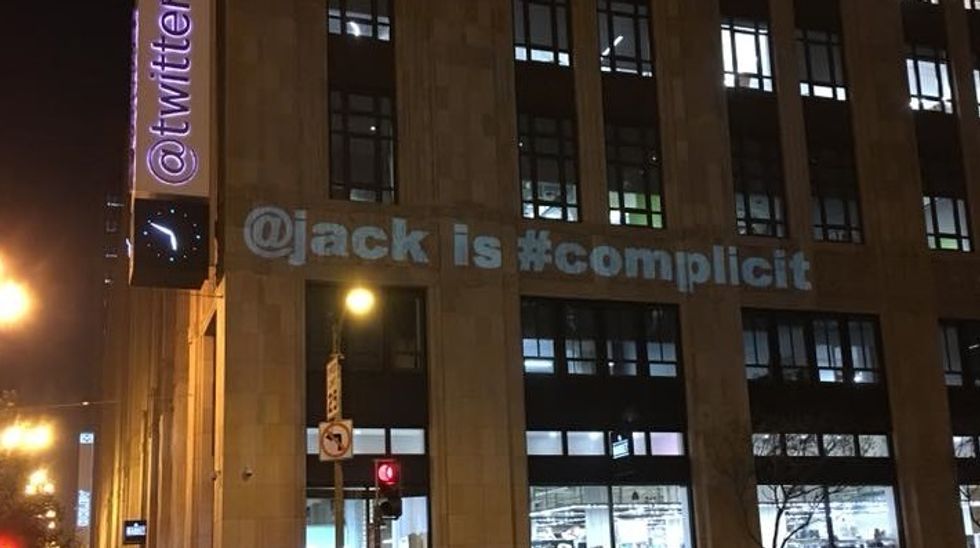 The Verge reports that a group called Resistance SF projected the message "@Jack is complicit" on the side of Twitters headquarters in San Francisco on Tuesday evening after Trump infamously sent out a tweet boasting that his "nuclear button" was bigger than North Korean leader Kim Jong Un's.

"@jack breaks the rules of his own company, Twitter, to amplify a madman and endanger the world," the group wrote on Facebook. "Jack Dorsey must resign or ban @realDonaldTrump."

The Verge notes that Dorsey has justified keeping Trump's account active by noting that what the president says publicly is inherently newsworthy.

Trump went off on multiple Twitter tirades on Tuesday in which he not only boasting about the size of his "nuclear button," but also called for the Justice Department to prosecute Hillary Clinton, took credit for the lack of airline crashes in 2017, and announced that he would no longer try to seek a peace deal between Israel and the Palestinians because the Palestinians haven't shown America "appreciation and respect."