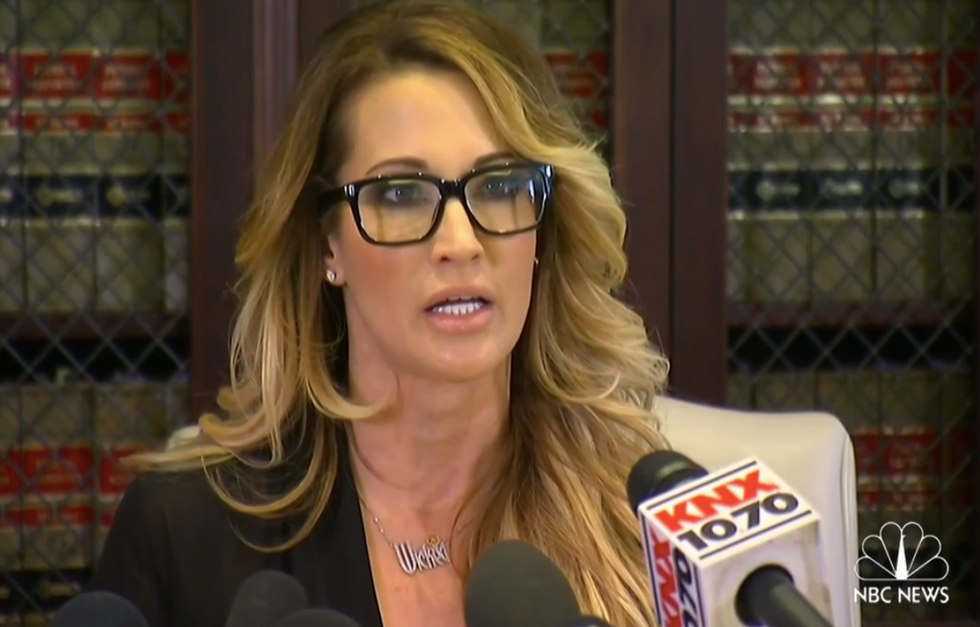 Jessica Drake -- one of the more than 20 women who accuse President Donald Trump of sexually harassing, groping, forcibly kissing or inappropriately touching them -- is being prevented from speaking out by a nondisclosure agreement, said The Daily Beast on Saturday.

“Jessica’s NDA blankets any and every mention of Trump, so she’s legally unable to comment,” Drake's publicist told The Daily Beast on Friday evening. “Jessica signed a non-disclosure agreement after her allegations of misconduct, and she can’t do as much as peep his name publicly.”

As the Daily Beast's Marlow Stern and Aurora Snow noted, nondisclosure agreements (NDAs) are often used by abusers who settle allegations as a means of keeping their victims silent.

These types of gag orders were a mainstay for Fox News, which covered up decades of sexual abuse, harassment and intimidation by forcing victims of the network's ousted CEO the late Roger Ailes and its one-time star anchor, Bill O'Reilly.

"In late October 2016, Drake became the 14th woman to accuse then-candidate Trump of sexual misconduct," wrote Stern and Snow. "At a public press conference, Drake, flanked by her attorney Gloria Allred, claimed that after she met Trump in July 2006 at Nevada’s American Century Celebrity Golf Championship, where she was working a promotional booth on behalf of the adult film company Wicked Pictures, he made a pass at her. Trump’s wife, Melania, had recently given birth to their son Barron at the time."

Trump has been broadsided in recent days by questions about an apparent financial arrangement with another adult performer, Stormy Daniels. Daniels reported received $130,000 from Trump attorney Michael Cohen, but signed a statement assuring that this was not "hush money" as part of the deal.

Yet another adult performer, Alana Evans, said on Friday that Trump did have an affair with Daniels after marrying First Lady Melania Trump and that Trump and Daniels once invited her to join in on a menage à trois.

“Stormy calls me four or five times, by the last two phone calls she’s with Donald [Trump] and I can hear him, and he’s talking through the phone to me saying, ‘Oh come on Alana, let’s have some fun! Let’s have some fun! Come to the party, we’re waiting for you,'” said Evans.