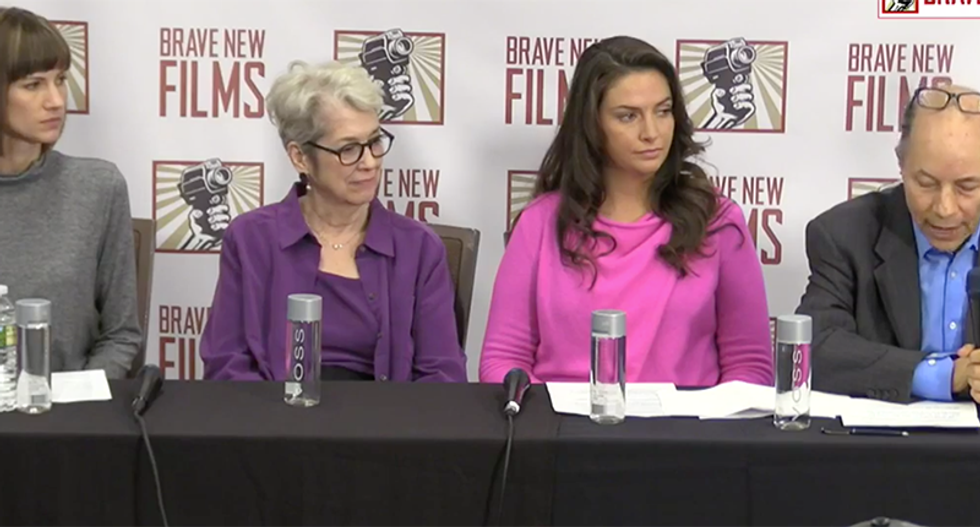 A total of 16 women joined together Monday to address their stories of sexual assault and sexual harassment at the hands of President Donald Trump.

While many of these women came forward during the 2016 election, the Trump campaign attacked them, their lives and many right-wing activists invented information designed to discredit them.

The three women that spoke earlier to Megyn Kelly sat at a table with documentarian Robert Greenwald of Brave New Films. He commended the reporters who have investigated the many accounts across all industries about sexual harassment.

"There was one man that wasn't being held accountable -- who's not being called out," Greenwald said. That's why he decided to create the documentary with the women.

"It really had an impact on your heart, your soul, your emotions," Greenwald said. He noted that so many women came forward to warn Americans, but "attention was not paid."

Today, Greenwald said "we know better. We know a lot better," when it comes to predators. He demanded those in politics to act against anyone of either party not to give anyone "a pass."

Jessica Leeds, Samantha Holvey and Rachel Crooks each introduced themselves, telling story after story of their horrifying encounters with Trump.

"I have a new dream now that this man will be held accountable for his actions and that future women will not be treated as less than just because they are a woman," Holvey said.

Crooks noted that given Trump owned the building in which she worked, she didn't have any power to do anything.

"Given this hostile work environment, my only solution at the time was to simply avoid additional encounters with him," Crooks said. "I do realize that in the grand scheme of things there are far worse cases of sexual harassment, misconduct and assault. But make no mistake, there is no acceptable level of this behavior. That some men think they can use their power, position or notoriety to demean attack women speaks to their character and not ours. Which, believe me, is a tough lesson learned."

She went on to say that it was only through other remarkably similar accounts that she felt empowered to come forward.

"Instead, this was serial misconduct and perversion on the part of Mr. Trump," Crooks continued. "Unfortunately, this behavior isn't rare in our society. Many women of any background can be victims. The only reason I am here today is because this offender is the president of our country."

She went on to note that Trump had dismissed his "Access Hollywood" tape as "locker room talk," but "having been the victim of such actions, I knew better."

She asked that some things should transcend politics and that all people, regardless of position or power be held accountable for their actions, including Trump.

Leeds walked through her disgusting story and further encounter, saying that she never once anticipated being on the front page of a newspaper. She was “absolutely destroyed” by Trump's election.

"The United States is a big strong country," Leeds said that she thought at the time. "We can survive this person."

But women kept coming up to her in public and told Leeds their own story. She said that she had hoped things were better for women in business, but "apparently I was wrong." When the Harvey Weinstein story hit and woman after woman began to come forward, people were finally being held accountable.

"Except for our president," Leeds said. She quoted Trump's White House, who has said that the women are all "liars." She noted that some are holding men accountable for bad behavior, however, "our president is not being held accountable for what he is and who he is."

Leeds said that this is part of the problem that is happening in Alabama. Crooks agreed, saying that Trump endorsed Roy Moore because he denied the allegations and it "worked for him."

Lisa Boyne spoke via phone to the press conference, telling her own story of being invited to a dinner party with Trump in the West Village. She said that he wanted the women to rate other women on a 1 to 10 scale. While at dinner, the men used the table as a "casting couch." The women were brought to the table one by one and he told them to walk across the table. Boyne said that Trump looked up their skirts as they walked by.

She said that John Casablancas ordered her to drink more but she refused and he was bothered by her refusal. She ultimately excused herself to the ladies room and from the restaurant. She explained that over the years her story was met with shame and questions of why she was there. She tried to pitch it to reporters, but no one wanted to hear it.

"As a parent I was so deeply deeply offended... because he had a son around the age of my son and what sort of values are we teaching our children when we say that something like rape is 'locker room talk,'" she shouted. "And that her husband talking about that is 'boy talk.' Everybody is normalizing as something that boys and men say in the locker room. That is the talk of horrible people and Trump keeps staying it to the press pool. And you're all taking it in like it's normal. It is not a normal way for people to talk. Why aren't people calling him out on that. Something that is so horrific -- I'm so fed up of listening to people. We take it in like it's nothing. We shouldn't teach our boys to talk like this."

She went on to say it was "one thousand times worse that what Al Franken has done."

Watch the full event below:

You can watch the clip of the Brave New Films documentary below: