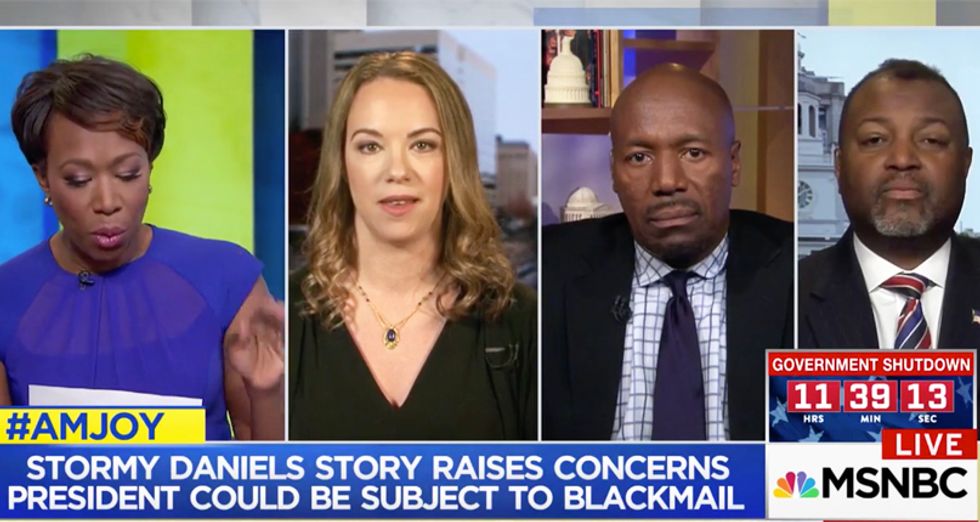 During an AM Joy panel discussion on both the Steele Dossier and President Donald Trump's personal lawyer paying off an adult film star to keep quiet about their affair, guests on the show said that the president has always put himself in the position to be blackmailed so he employs a "lawyer goon squad" to protect him and to blackmail back.

"Donald Trump, was, reportedly, willing to pay $130,000 to squash the [Stormy Daniels] story. Thus, maybe making him susceptible to blackmail. What do you make about it," host Joy Reid asked the panel.

"Of course Trump is susceptible to blackmail," authoritarian expert Sarah Kendzior explained. "It kind of blows my mind that a lot of people are just now realizing this. It's like just realizing that he's a racist. Why do people think he has surrounded himself with a lawyer goon squad for 40 years? Whether it's Roy Cohn or Michael Cohen? The company he keeps include the American mafia, Russian mafia, arms traders, pedophiles, money launderers and other people involved in white collar crime."

"When you surround yourself with those sorts of people, engagements in those kinds of actions, your lawyers will be very aggressive. They put out an NDA [nondisclosure agreement] for anybody that Trump comes in contact with," she continued as her fellow panelists smiled. "They know he is a consistent scumbag. This is just one more example of a pattern of behavior that has been going on for Trump's entire life."