‘This is American racism’: Ex-evangelist righteously pounds Tony Perkins who wants to ‘punch the bully’ Obama 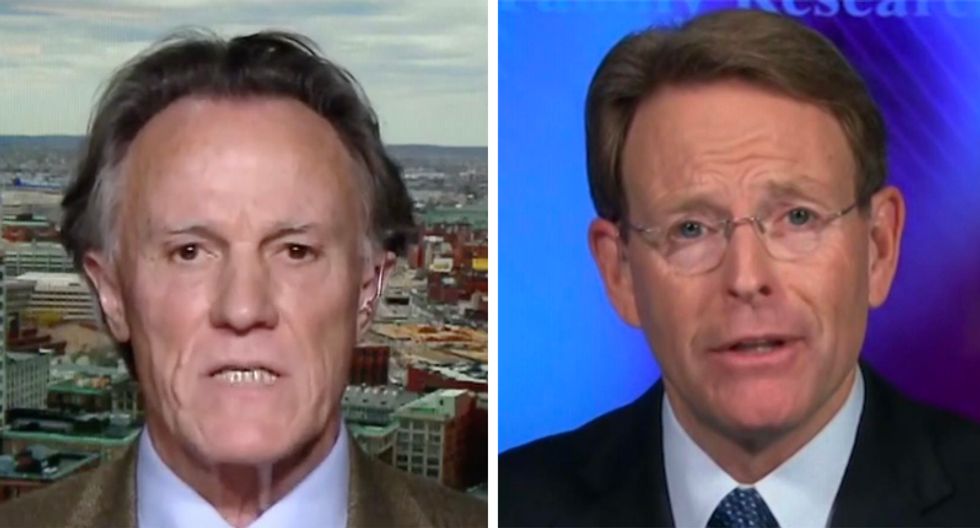 Appearing on MSNBC's AM Joy, former evangelist Frank Schaeffer launched into a righteous rant and accused Family Research Council’s Tony Perkins of being a "racist" over comments he made to Politico calling former President Barack Obama a "bully" who needs to be punched.

Earlier in the week, Perkins told Politico that he was glad to see Trump pushing back at Obama and the "leftists," saying, Evangelical Christians “were tired of being kicked around by Barack Obama and his leftists. And I think they are finally glad that there’s somebody on the playground that is willing to punch the bully."

"You know, you only have two cheeks,” Perkins added. "Christianity is not all about being a welcome mat which people can just stomp their feet on."

Addressing the Perkins interview, host Reid claimed, "What we're seeing is people on the religious right who want someone to punch a bully, the bully being Barack Obama apparently."

"I guess Barack Obama was a bully because he was black," Schaeffer responded. "You have to remember that everything that has happened since his presidency is a reaction by a core group of white voters. Let's remember, when we talk about evangelicals, in 1958, Jerry Falwell Sr. was denouncing integration and started a white private school academy to get around the new rulings from the courts."

"So, if you fast forward right now, it isn't that this history doesn't have a context," he explained. "The context is American racism. I grew up with these guys, I knew Tony and he got into politics because of my evangelist father Francis Schaeffer who challenged him to take a stand against these issues."

"He seems to have forgotten the basis of Christian theology which is to be forgiven in this tradition, you need to confess first," Schaeffer said before turning to the president being defended by Perkins. "Donald Trump never confesses to anything. There was one time he apologized for molesting a woman in a criminal assault which was caught on tape, he tried to take the tape back, said he would sue the women who claim he assaulted them and call them all liars. This is not a confession."

"Tony Perkins forgot his own theology and replaced it with a theology of revenge on people he disagrees with politically, and that's what's going on here," he continued. "Revenge of white American, evangelical right-wingers and who they want to punch in the mouth is not just black Americans but, to put it in the words of the President of the United States, those who live in shithole countries. So they're willing to put up with anything when it comes to moral degradation to see those ends achieved. I'm glad he put it in terms of revenge, at least he misspoke from his point of view but told the truth."