'Your bar is so low': MSNBC's Mika sickened by GOP lawmaker's fawning praise of Trump 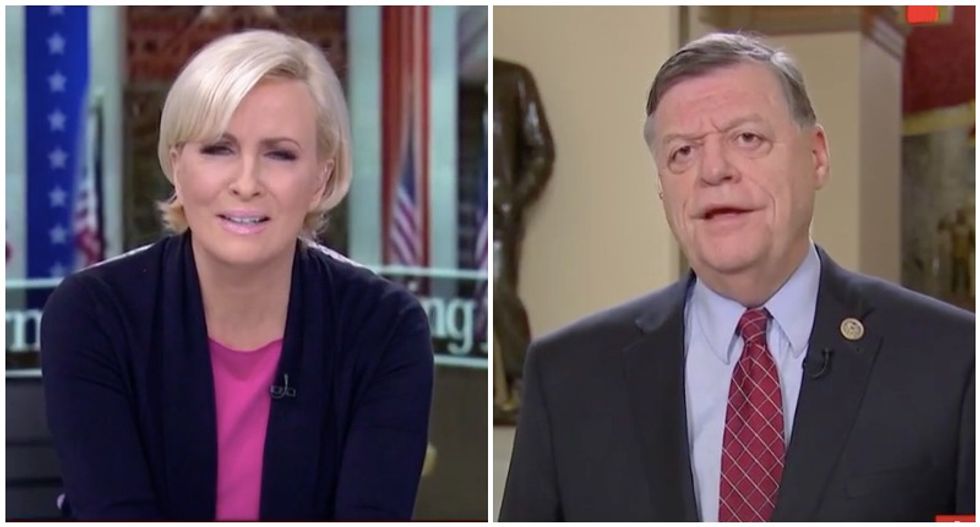 MSNBC's Mika Brzezinski was appalled by a Republican lawmaker's praise for President Dona'd Trump's handling of negotiations on immigration policy that resulted in a brief government shutdown.

The "Morning Joe" co-host asked Rep. Tom Cole (R-OK) whether the president's tweets and controversial statements during the legislative process had been helpful, and the lawmaker said the ends justified the means.

"He handled himself very well during this," Cole said. "He allowed the events to unfold, they were unfolding to his advantage, the administration did everything it could to minimize the impact of the shutdown. I give him high grades for this particular episode, so we'll see going forward. But he did what he needed to do, and he walked out the winner -- not the loser."

Brzezinski asked whether Cole thought it was helpful that Trump referred to African nations as "sh*thole countries."

"Well, I wouldn't ever excuse those kinds of comments," Cole said.

Brzezinski made a face like she'd smelled a foul odor, and she said "your bar seems so low."

The Oklahoma Republican then said the president's insults were no worse than lawmakers revealing those Oval Office remarks.

"On the other hand, when you take them out and start spreading them around and exacerbate the situation, you have to ask yourself whether you're being helpful or not," Cole said.

The congressman then bashed the bipartisan group of senators who tried to reach a compromise on immigrants under Deferred Action for Childhood Arrivals, saying House lawmakers should have been invited to participate.

"The issue there was, in my view, you should haven't tried to end run the process," Cole said. "We had senators coming in with what they thought was a deal, but it wasn't an acceptable deal to the standpoint of the president, it would have never gotten through the House. Let's go back and put everybody at the negotiating table that has to sign off on this thing, not just a group of senators. I'm sorry, the Constitution demands it get through the House and demands the president sign it. So if those people are not at the table, your chances of getting a deal go down."