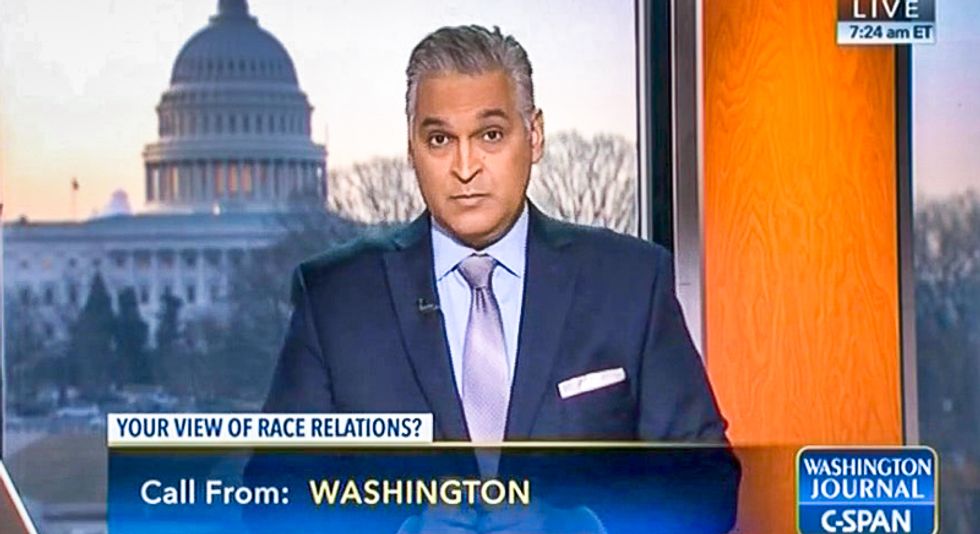 C-SPAN host Pedro Echevarria on Monday challenged a caller who claimed that racial problems in the U.S. began after President Barack Obama was elected and "started stirring up" divisive feelings.

"We struggle a lot with race relations," Laura explained. "And Martin Luther King was a man who gave us all some sanity and respect for each other, regarding the 'Don't judge a man by the color of his skin, but the content of his character.'"

"That's been a guiding principle for me all of my life," she said. "But it wasn't until Obama got into office that all this stuff started stirring up. And now there's even -- slave trade started in Africa and it's just sad. And the Muslims are hunting down the black Africans and killing them. And that's because they were armed and financed by the last administration."

The caller continued: "Our black people today are working. Okay? They have the highest -- in history -- employment rate. And they're buying nice homes and they're bouncing babies and they're having a good life."

Echevarria interrupted for a clarification about Obama's responsibility for racism in America.

"So you're saying all these issues, when it came to race relations, was the result of the last administration?" the C-SPAN host asked.

"Most definitely, yes," Laura replied. "He was elected -- say, we're all racist -- he was elected by white people, okay? Not once, twice. And nobody seems to think about that. And what's going on in Africa, he gave those people billions of dollars. Why can't he help those people in Africa?"