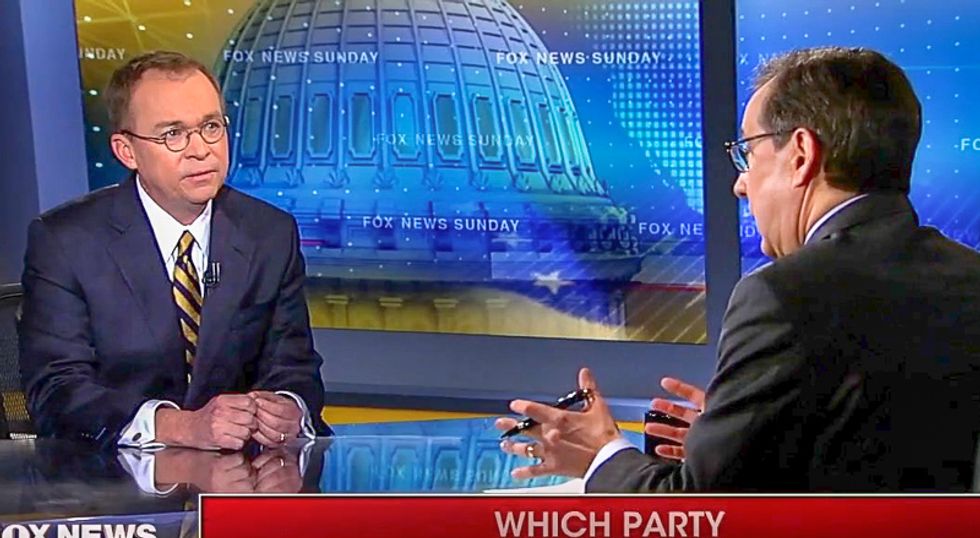 During an interview with White House Budget Director Mick Mulvaney, Wallace noted that Trump had said that President Barack Obama deserved blame for the 2013 shutdown even though Republicans initiated it to protest Obamacare funding.

Mulvaney insisted that the "two presidents have acted" very differently during the shutdown.

"I will look you in the eye and tell you President Obama wanted that shutdown and he wanted to weaponize it," Mulvaney insisted. "This president has worked really hard to prevent the shutdown."

"He didn't have a bipartisan meeting with congressional leaders yesterday," Wallace pointed out. "Does he have one on the schedule today?"

"I don't think anybody can say that this president wants this shutdown," Mulvaney said. "You could not say the same thing about President Obama."

"You blame Democrats," Wallace observed. "But back in 2013, you supported holding the government hostage on this question of Obamacare."

"Why was that legitimate then -- the right reason to have a fight -- but it's not legitimate now," the Fox News host wondered.

Mulvaney argued that times are different because Democrats support everything in the bill to open the government, even though the resolution does not include a solution for so-called Dreamers.

"They were asking us to vote to fund Obamacare," Mulvaney complained. "Something that was very difficult for Republicans to do and we wouldn't vote for it."

"The point is that both them then and you now are willing to shut down the government because they support or oppose a policy," Wallace said.