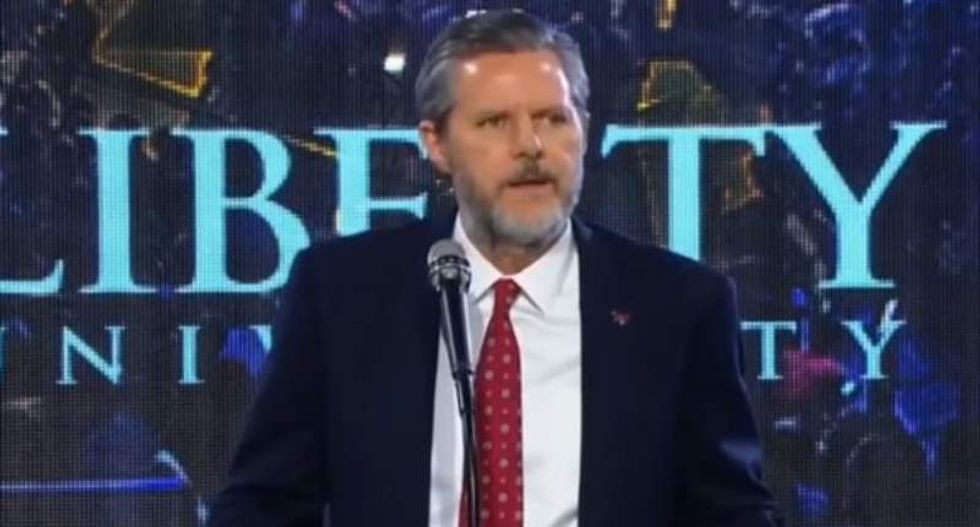 The editor in chief of Christianity Today had some harsh words for Jerry Falwell Jr., who hit the cable news shows to defend Donald Trump after it was revealed the president  allegedly carried on a year-long affair with an adult movie star.

In an editorial, in which Mark Galli admitted he was hesitant to "enter the political fray," the editor claimed that "when fellow evangelicals start exegeting [expounding]  and applying Scripture in the public square, we think we have something to add to the conversation."

Noting that Falwell stated, "All these things [Trump’s affairs] were years ago, and he has apologized,” Galli called out the evangelist for getting his facts wrong in an effort to provide cover for Trump.

"In fact, the payoff for one of the alleged affairs was offered a mere 14 months ago; meanwhile, Trump has never apologized for his affairs, only for his lewd remarks in one video," Galli wrote. "He’s never asked forgiveness as far as I can tell. But even if we charitably assume he has privately apologized to these women and to his wife, Falwell’s exegetical justification for Trump’s adulteries is startling."

In an interview with CNN's Erin Burnett, Falwell defended Trump saying, "Jesus says that if you lust after a woman in your heart, it’s the same as adultery. You’re just as bad as the person who has … Our faith is based on the idea that we’re all equally bad and we’re all sinners and we all need Christ’s forgiveness."

"One does not have to have a doctorate in ethics to see the problem here. Jesus is saying that outward behavior needs to be matched by inward attitudes, that a fully righteous person does more than attend to external behavior. He’s not saying—and no Christian ethicist I know of would say—that lusting is morally the same as adultery, or similarly that anger is the moral equivalent of murder," Galli wrote. "The reason we succumb to such poor exegesis at such times is not hard to fathom. We do this sort of thing whenever we are in a tussle with our spouse or church or friend, and we need to justify ourselves or our views. We twist Scripture to make ourselves look virtuous and to condemn our opponent."

As for the Trump "mulligan," he wrote: "I’m unclear, however, as to whether we should give people who ought to know better a mulligan. But it’s wrong, and when a brother or sister does it, especially in the public square, we should note it."