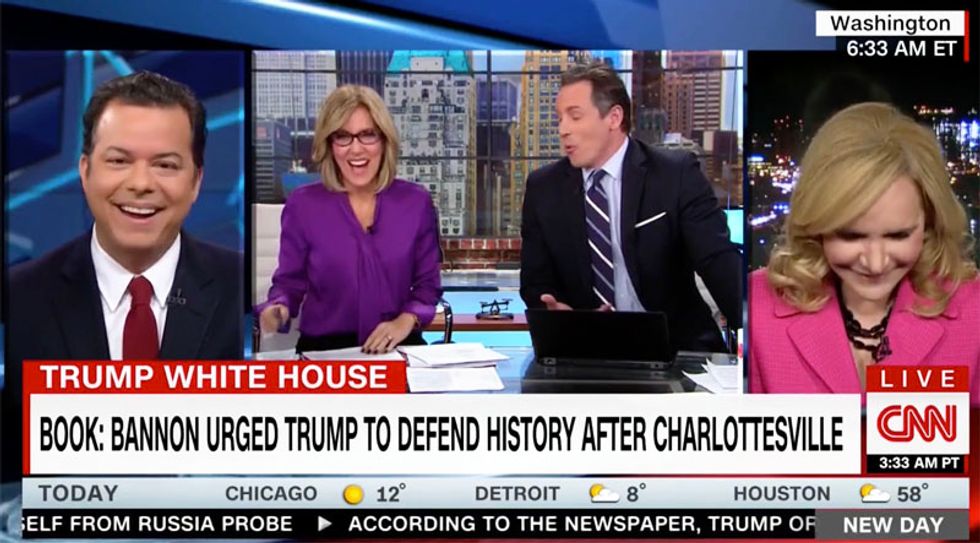 A CNN panel was alternately amused and stunned into silence on Friday morning over a revelation in Michael Wolff's bombshell book that President Donald Trump was desperate to say something nice about the Ku Klux Klan following the Charlottesville protests that left one one woman dead.

CNN New Day co-host Alysin Camerota noted, "I'm interested in what was behind the thinking in the Charlottesville stuff. Obviously that exploded and became so inflammatory when the president said, 'Well, there are good people on both sides,' and he didn't want to condemn the neo-Nazis and the people who were marching for the KKK."

"This is a little insight into how he felt about the KKK" Camerota said before reading an excerpt from the book. "'Privately, he kept trying to rationalize why someone would be a member of the KKK - that is, they might not actually believe what the KKK believes, and the KKK probably does not believe what it used to believe, who really knows what the KKK believes now?'"

"Why else would you join the KKK? Do they have good benefits? Is there an insurance plan that goes along with it?" co-host Chris Cuomo asked as his guests -- Daily Beast editor John Avlon and RealClear Politics correspondent A.B. Stoddard  -- began laughing.

"Why else would you join?" Cuomo asked again.

"This is insightful, A.B.," Camerota chimed in. "He wanted to be able to say there are good people on both sides, so he's is ruminating 'surely they're not as bad as we all heard. Maybe there's something in it for everybody?'"

Guest Avlon could only reply, "Dah," with Stoddard adding,  "The KKK hands out really good swag."