CNN panel mocks ‘executive time’ carved out in Donald Trump’s schedule: ‘Being president is easier than we thought’ 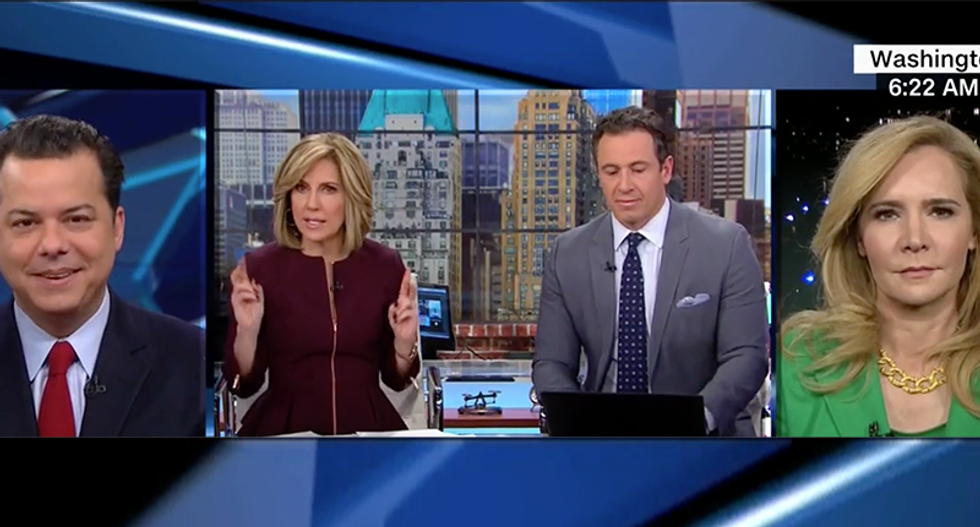 Camerota walked through the fact that the unofficial schedule was leaked to Axios over the weekend and explained that this new leaked schedule is what the staff understands as Trump's time in the West Wing.

"First of all, say I love the new euphemism for TV watching as 'executive time,'" Avlon laughed. "I expect this to take on like wildfire across the country. 'I can't. I'm sorry. I've got executive time.' That said, this is serious business. Going to work at 11:00 a.m. when you're president of the United States? Just contrast that with George W. Bush, admittedly an early riser, often showed up at the Oval [Office] 6:45 a.m. President Obama showed up a little bit later, often went to the gym, between 9:00 and 10:00. But he worked exceptionally late. An 11-to-6 workday isn't even a full eight-hour workday!"

Camerota noted that being president seems to be easier than everyone thought. Reports are that Trump is scaling his schedule back even more than the shorter one he works now. During the campaign, Trump often criticized Hillary Clinton for not being able to work the hours that he does.

"I mean, I don't know how you can be president and work that chunk of time," she said.

Avlon noted Trump "works the phones" a lot and Cuomo said that Trump has been known to "work hard" as a businessman.

However, "it's about priorities," Cuomo continued. "I picked up the phone, as I'm sure you did last night, trying to make sense of the context of this story. And it does seem clear from sources that there has been a rearrangement of priorities. He is obsessed with the criticism against him. And his people aren't protecting him. He's getting beaten up for a bad reason. They're not saying all the great things he's doing. They're not defending him. It seems he is spending more and more of his time on that."

Commentator A.B. Stoddard noted that the reports that Trump has been insistent that he spend more time consuming cable news when he already watches anywhere between four and eight hours of television daily. But, she also said that when the news goes quiet on Trump or shifts to another topic, it seems the president needs to say or do something to draw attention back on himself.

"He gets agitated and will throw out some controversy to bring the news cycle and headlines back to focus on him," she said. "It's the fact that they believe it is counterproductive to his governance that is so concerning. He's working the phones? I don't think calling Rudy Giuliani or some old friend to complain about Don Lemon is actually getting the work of the people done. So, that's the concern is not so much the quantity of the hours but that is certainly a light day for the leader of the free world. But it is is what he is doing with that time. That is the big concern, clearly of his own staff who leaked the schedule."

Camerota noted that she wasn't kidding about being president is easier than thought. "The place must run itself," she said. "Who is advancing the agenda? Who is doing all the work of the White House?"

Avlon said he thinks it's H.R. McMaster and the national security leaders, which, he said many might take comfort in.