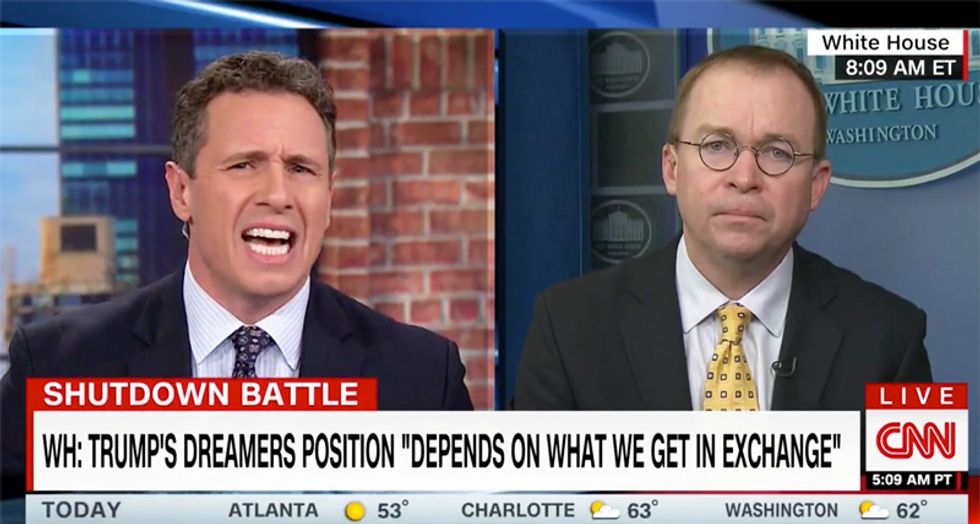 A combative and obfuscating budget director Mick Mulvaney spent an entire interview with CNN's Chris Cuomo ducking questions on what President Donald Trump will do about Dreamers facing deportation and appeared to have no idea what the president thinks.

With only seventeen days left for Congress to hammer out a deal on the children of immigrants staying in the only country they have known, the New Day host peppered the evasive Mulvaney about what Trump will do, with the OMB director finally admitting White House policy is contingent on "What we get in exchange."

Cuomo got right to the point on the Trump and the Dreamers, asking, "What is his position?"

"The position is as it has been from the very beginning," Mulvaney attempted. "We are interested in border security."

"That's not a DACA position," Cuomo shot back. "What's his position on dreamers?"

"I want you to answer this question," Cuomo pressed.

"You don't get a chance to pick and choose," Mulvaney argued. "We want a large agreement. We want a big deal that solves the reason that we have a DACA problem in the first place. If you simply gave amnesty or whatever you want to call it to the folks who are here, but don't solve border security, then you are simply delaying another DACA problem 10 or 15 years."

"What are his terms and conditions?" Cuomo persisted. "Who does get to stay? "

"Chris, I know you won't be offended by this, but I'm not negotiating with you on national television," Mulvaney warned.

"I just want you to hear it. I won't say anything," Cuomo said, not giving up. "Just say what his position is on it. How do they get to stay, who gets to stay?"