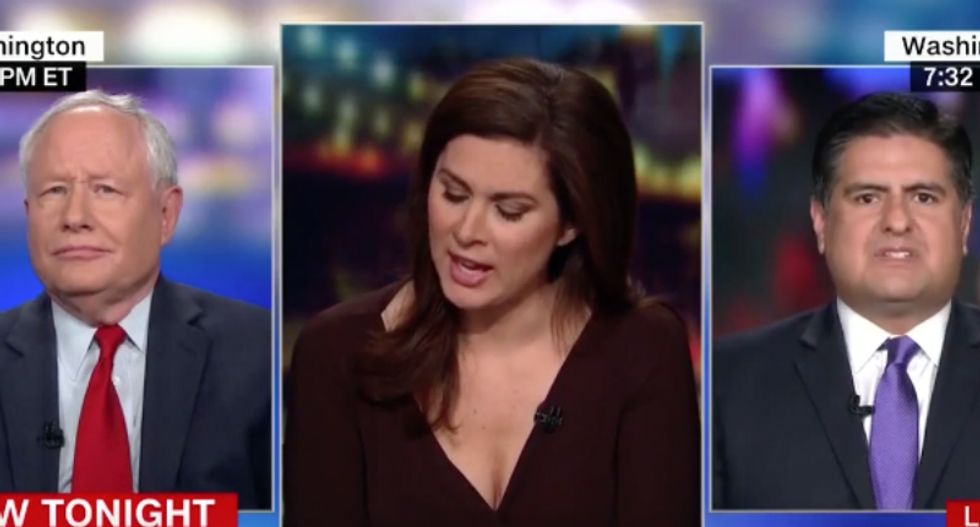 Despite a growing number of Republicans condemning President Donald Trump for his dangerous attacks on press freedoms, a former aide to his transition tried to claim the president's "fake news" epithet had nothing to do with dictators using it — and was summarily smacked down by a CNN host and conservative commentator.

"I have conversations with people overseas, sometimes there are pretty crazy conspiracy theories thrown out there, and the first thing they say to delegitimize reality, sometimes, is 'fake news,'" host Erin Burnett said during the Wednesday night interview. "The term 'fake news,' we all know who thought of it."

She listed off the instances of the term being used by dictators for her guests, The Weekly Standard's chief editor Bill Kristol and former Trump transition communications director Bryan Lanza: by Syrian President Bashar al-Assad, Venezuelan president Nicolas Maduro and even a Russian foreign ministry "fake news" website.

"I'm uncomfortable with it," Lanza admitted. "But at the end of the day what the president is doing here in the U.S. matters a little bit more than sort of the interpretation of his words in the international community."

"He's criticizing the media," the former communications director said. "No one is free of criticism."

Burnett then turned to Kristol, who said that although "media can take care of themselves," Trump's claim that two former FBI agents found to have exchange text messages critical of him are "traitors" are beyond the pale.

"It's an unbelievable kind of abuse of rhetoric, and dangerous," Kristol said. "You don't really want people calling other people in the government traitors when there is no charges against them."

"Doesn't [Trump] bear some responsibility for the fact that dictators around the world in closed governments that don't allow for open elections are now using his term to demean and deride and dismiss every kind of story they don't like?" Burnett asked Lanza.