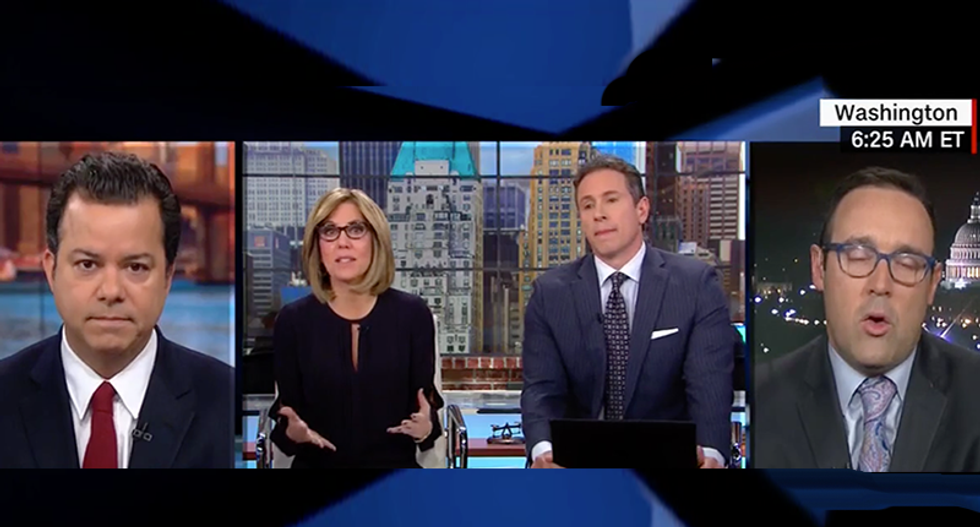 CNN host Alisyn Camerota could only joke about President Donald Trump’s tweet boasting about the size of his “Nuclear Button.”

"No. 1, I don't think you should ever refer to any of your body parts as a button," Camerota told the CNN panel, noting the tweet is causing many to question Trump's mental state. "No. 2, I don't know what to do with this."

Daily Beast editor John Avlon said that Trump's tweet would have been rejected in the script of the nuclear war film "Dr. Strangelove."

"This is a president of the United States doing a measuring contest about nuclear weapons," he continued. "We can't begin to normalize this. This is dangerous. This is childish. It's unpresidential. It's not befitting to the leader of the free world."

He said that there have been two responses in the White House: “A full face-palm and a silent scream,” while other “sycophants” are saying “great job boss.” Both, according to Avlon, are unacceptable. "Somehow we've reached a pathetic new low."

Co-host Chris Cuomo noted that it was "too bad" that press secretary Sarah Huckabee Sanders refused to address the tweet given that she's the voice of the White House. "She represents their administration," he said.

"And the president of the United States," Camerota stated.

Cuomo noted, however, that these tweets are just more of the same the world has seen from Trump. "This is what he does. He's hyperbolic. He's personal. He's incendiary," Cuomo said.

Chris Cillizza agreed, saying, "we've always known that size matters to Donald Trump, everything is the biggest. But we're talking about nuclear arsenals. Kim Jong-Un is demonstrably not stable. It takes on a different cast, I think, given the stakes."

Cuomo noted that while this was happening, South Korea and North Korea reopened talks. Cilizza said that he anticipates by 6:30 a.m. Trump will take credit for it.

Cilizza also argued that this isn't something outside of the norm for Trump. "If an alien landed on earth and you needed to explain the idea of Donald Trump's presidency you could show them the 16 or so tweets yesterday that culminated in this North Korea tweet and be like, 'This is it.'"

"We have the precedent on of 44 other presidents to judge by what is presidential in an American context," Avlon said. "This is not in that same universe because there's no assumption of responsibility for power. And the administration can take credit for being aggressive and much tougher with North Korea and maybe challenging the calculus, putting aside the possibility of catastrophic miscalculation, based on the president's comments. Even and especially without those tweets, these tweets are simply, pull back the veneer of toughness and show someone who's too often insecure, impetuous and childish with enormous power. And that diminishes American leadership around the world."