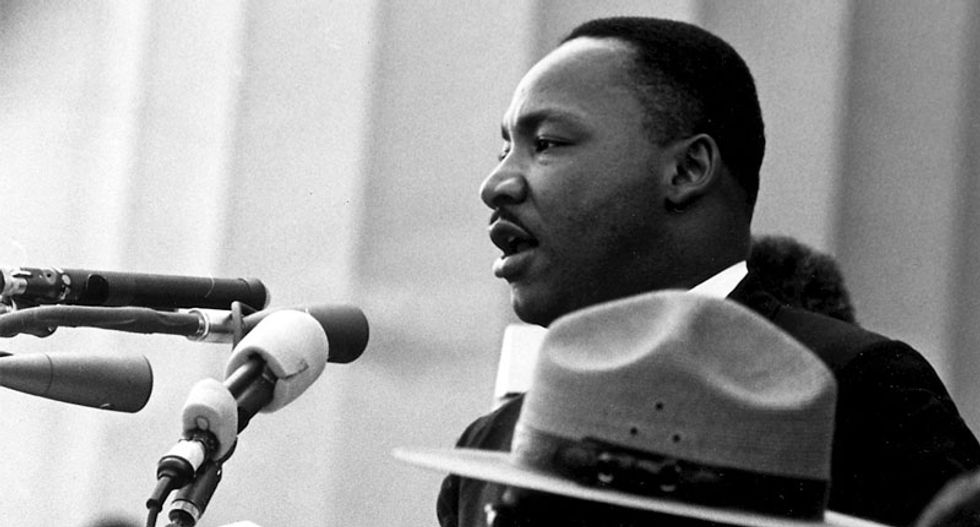 Dr. Martin Luther King giving his "I Have a Dream" speech during the March on Washington in Washington, D.C., on 28 August 1963 (Wikimedia Commons)

A report from the Daily Beast on Martin Luther King Day revealed an old lawsuit from Cohn's early days working for disgraced former Sen. Joseph McCarthy (R-WI) and other leaders.

It was the summer of 1964 in Harlem and a white police officer shot a black child, who may or may not have been armed. In a story that sounds eerily familiar, officer Thomas R. Gilligan said that he heard a "commotion," ran out and ultimately shot a 15-year-old African-American boy. Gilligan and an older white adult, who said they "witnessed" the incident, claimed that Gilligan identified himself and the young man produced a knife and slashed the officer's hand. Other children who went to school with the boy saw no knife and never heard the officer identify himself.

“Policemen should not shoot boys half their size,” said the Congress of Racial Equality (CORE) at the time.

The death and cases around it sparked violence from Harlem to Bedford. By the end, one protester was dead, 118 were injured and 465 people were arrested. The officer was exonerated and a grand jury refused to indict him.

Cohn helped Gilligan sue King and other leaders for what was said at the rallies and in the media. The move was ironic given King came to New York for a "peace mission" spreading non-violent protest. Many angry community members weren't interested in peace and went on the attack. King was named along with other national leaders in the suit by Gilligan.

By 1954, Cohn was already well-known as McCarthy's hatchet-man in the witch-hunt against Communists.

“My scare value is high,” Cohn once described himself. “My area is controversy. My tough front is my biggest asset. I don’t write polite letters. I don’t like to plea-bargain. I like to fight.”

“The complaint alleges plaintiff enjoyed an outstanding and excellent reputation and good character, that defendants since in or about July, 1964, conspired and maliciously and willfully participated in a plan and course of action designed to defame and injure the plaintiff in his good name and reputation, in his profession as a policeman; to destroy his income and livelihood and to remove plaintiff as a police officer of the New York City Police Department," said the court in Gilligan v. King et al.

King's lawyers argued that his speech was protected under the First Amendment. The legal team cited New York Times Co. vs. Sullivan (1964) in which the U.S. Supreme Court protected speech and made it more difficult for "public officials" to claim they've been libeled.

King died without the case being resolved. Cohn moved forward and in wasn't until 1968 that the New York Appellate court allowed Gilligan's case to move to trial. However, the courts ultimately decided that “the occupant of a governmental position, even of a minor nature, is a public official.” Cohn lost.

Today, Cohn's protege is the president and has proposed rewriting the libel laws so that he can sue people. Such laws are developed state by state, thus doing so would require legislation in all 50 states and the five territories.

Read the further details at the Daily Beast.