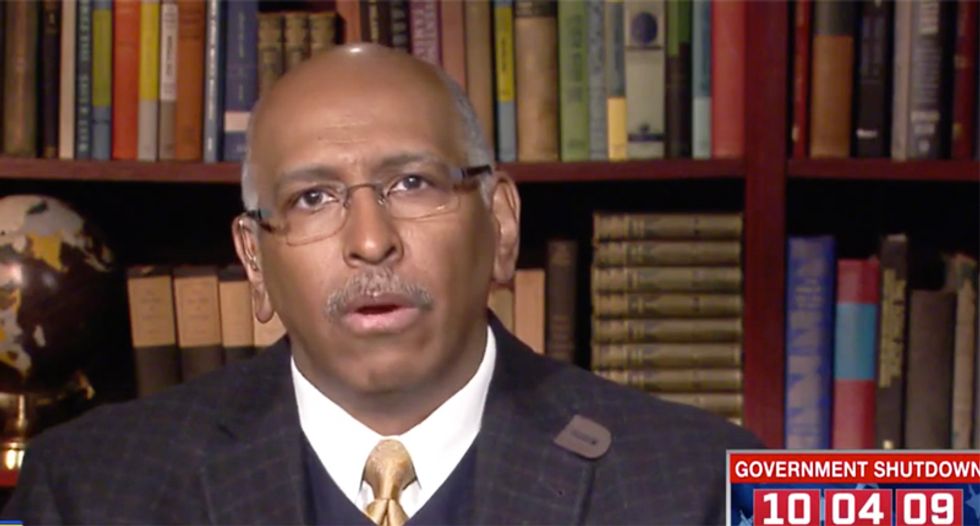 Host Joy Reid got the ball rolling by stating, "This was a strange week for Donald trump. It started out with the appearance that he was going to cut a deal on immigration. that would have been popular. Kind of the ironic is that, had he gone ahead and signed the Graham-Durbin bill and stayed with them, he would be celebrating having signed a popular piece of immigration legislation into law. Instead he's whining on twitter. So what went wrong?"

"I think you saw his better instincts at the beginning of the week," Steele conceded. "You saw how quickly they could be twisted by those who do have a hard line on immigration. The president, it is very true, is influenced more by the last voice he hears in his ear than by the grounded principle of the policy. That's the problem here."

"The president, in many respects, has been AWOL in these negotiations," he continued. "You watched that Senate floor last night. It was like ho-hum. There was no energy and no real drive. And that's because the White House was not in force here, not in play the way we saw in the Obama term. The president there was trying to rally."

"You had leaders in the Republican Party in communication with the president's White House. Yes, there was still a shutdown, but that energy was there to try to get to a goal. The key player here is president of the United States."

"It made it very hard for the Senate leadership to command and control the moment," Steele added. "In other words, to be able to pull a Chuck Schumer back into the conversation to cut a deal. There was no energy from the White House to do that. At a certain point, you saw the frustration, everyone comes out and takes their partisan shots, the Trump shutdown, the Schumer shutdown, all that crazy BS. The fact of the matter is a lot of this could have been avoided if the president had stepped into the game and done that great negotiations thing he likes to do."