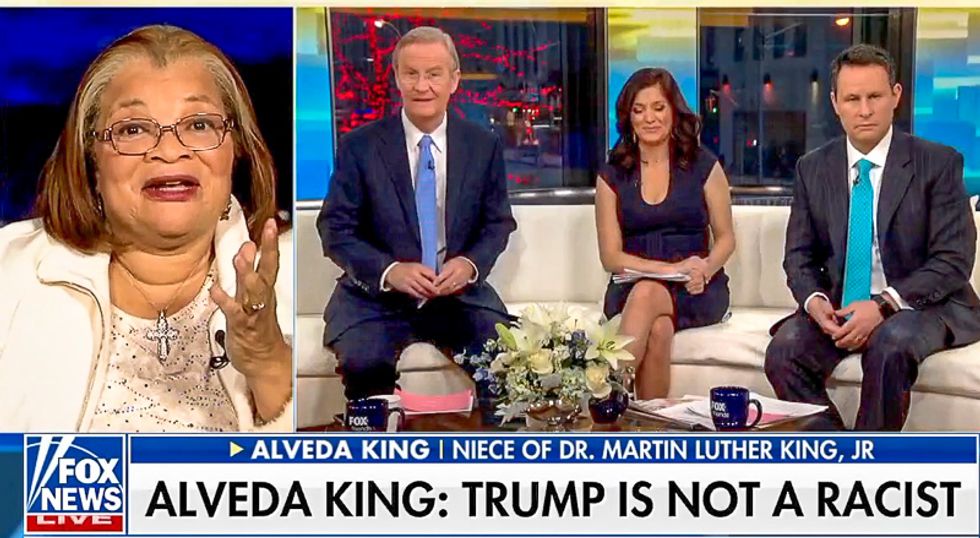 Alveda King, the conservative niece of Dr. Martin Luther King, Jr., insisted to Fox & Friends on Monday that President Donald Trump is not a racist even though he reportedly called African nations "shithole" countries.

During an interview with King, Fox & Friends postponed a discussion about Martin Luther King Jr. Day to ask about Trump's alleged comments about African nations.

"I do not believe President Donald Trump is a racist," King opined to the show's hosts. "I mean, look at everything. The economy is up, jobs are up in the black community, there's great promise to get a lot of people who have been unfairly incarcerated out. So, there's so many economic opportunities, opportunities for babies in the womb. The president is working for America -- period -- as he's draining the swamp."

"And African-Americans are benefiting," she continued. "Our jobs are going up. Our unemployment is going down. Companies are saying they are going to raise the minimum wage and do bonuses because of the tax cuts. So, the president is helping the African-American community. And I don't believe President Donald John Trump is a racist."

King praised Trump for giving African-Americans "opportunities" like allowing people who have jobs to stay on Medicaid.

"Even on Medicaid, he says, we can still give you the assistance, but we can also give you a job," King explained, pointing out that one woman was continuing to work at the age of 103. "There's a saying: If you don't work, you don't eat. The lady is 103 years old, she's still going to work every day."