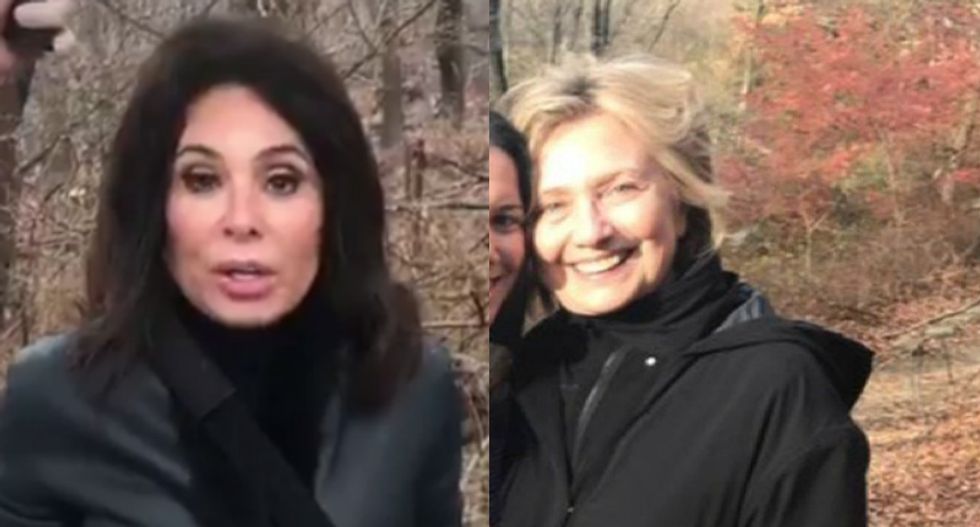 Judge Jeanine Pirro searches for Hillary Clinton in the woods in Chappaqua, NY (left) and the former candidate's hiking photo taken shorty after the 2016 election (right). Images via Twitter.

While the rest of the country waits with bated breath to see whether or not the Senate will reach a deal that to prevent government shutdown, Fox News pundit Jeanine Pirro has taken to the woods of Chappaqua, New York — to find Hillary Clinton.

"Here I am in front of the woods in Chappaqua, looking for Hillary!" the controversial former judge said in a teaser video posted on Twitter Friday night.

"Do you think I'll find her?" she asked.

Clinton's penchant for woodland walks became something of a joke after she lost the 2016 election, when a hiker met the former Democratic nominee a mere day after she conceded the election to Donald Trump.

Up to the woods of Chappaqua, NY I go. I’m on the search for Hillary. All new #StreetJustice tomorrow! pic.twitter.com/mFILGtT64I