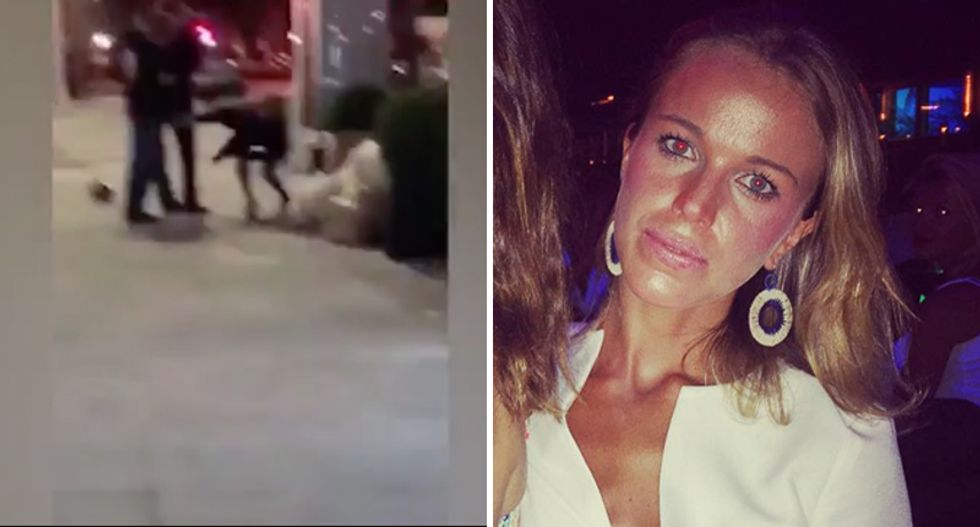 An NFL heiress allegedly prompted a New Year’s Eve fight after making anti-Semitic comments at a New York City restaurant coat check, according to video released of the incident.

As the Daily Beast reports, millionaire heiress Jacqueline Kent Cooke—whose father was the late Jack Kent Cooke, the former owner of the Washington Redskins—allegedly “attacked a man with a designer glass purse” after she became agitated while trying to retrieve her coat at an upscale Manhattan restaurant.

A witness said Cooke told the person in front of her to “hurry up Jew,” prompting Linda Thomas, the wife of 52-year-old Matthew Haberkorn to ask her to repeat herself.

According to Haberkorn, once outside he asked Cooke why she said that. “She took her purse, which was a mirrored glass purse, and smashed me with it,” Cooke told the Daily News.

Cooke, on the ground, told her boyfriend Haberkorn "called me a f*cking b*tch, [he] called me a c*nt.” As Cooke tried to get up, she fell over on the pavement. Cooke’s boyfriend pursued Haberkorn, getting increasingly more aggressive before pulling Haberkorn to the ground.

According to Thomas, when she confronted Cooke about her language, she asked, “Why don't you use your money to get a nose job?”

When confronted by the Daily News, Cooke denied even being at the restaurant, telling the publication she was in her apartment on New Year’s Eve. The News reports she later turned herself in to police.

A researcher the Arizona Senate hired to double-check an analysis of ballots by election conspiracy theorist Jovan Pulitzer said his claims that there were upwards of 12,000 counterfeit ballots were “utter rubbish.”

A trove of newly released documents related to the Arizona Senate’s partisan review of the 2020 presidential election shows that EchoMail CEO Shiva Ayyadurai was hired to review Pulitzer’s work. Pulitzer, an election conspiracy theorist known best for an “invention” dubbed “kinematic artifact detection,” has built a rabid following in the election fraud conspiracy world even though he has no background in election work.