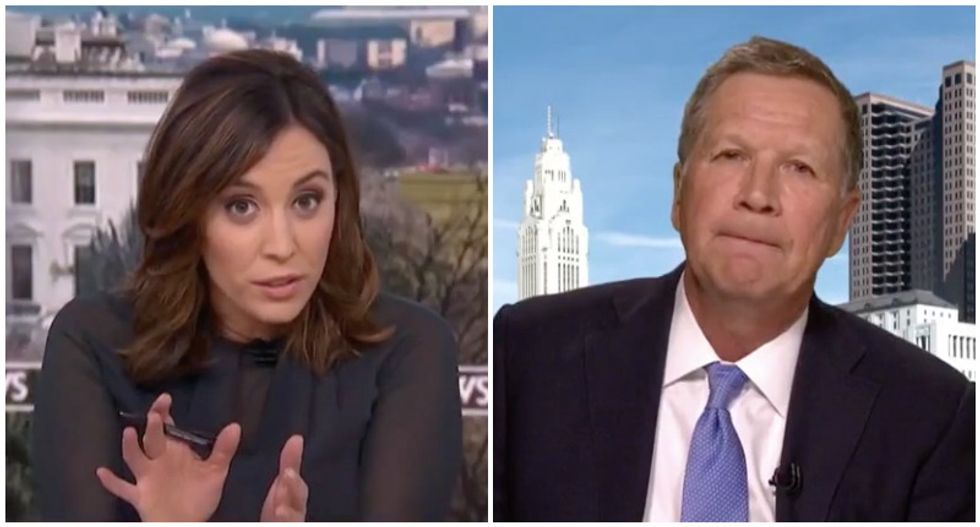 The Ohio Republican has urged Congress to allow residents protected under Deferred Action for Childhood Arrivals program to remain in the U.S., and he complained the president was needlessly "dividing people" with his anti-immigrant rhetoric.

But when pressed, Kasich refused to say Trump was racist.

Kasich broke in, and either incorrectly guessed where Jackson was headed -- or tried to head off her question by trying to change the subject.

"I didn't even ask about 2020," Jackson said, and Kasich tried unsuccessfully to steer her back toward the topic. "No, I was going to ask you about something else, the comments Dick Durbin said (Friday) with the comments being racist. Michael Steele was on the show, someone you know from the RNC, he definitively believes that the president is racist. Do you call Donald Trump is racist?"

The smile on Kasich's face faded away, and he adopted a look of troubled concern.

"Were they racist?" Jackson asked, and Kasich again said he doesn't call names. "It's a category, not a name, respectfully, sir."

"No, it's a name, it's a name," Kasich insisted, and then snapped at Jackson. "Look, Hallie, I have said what I have to say, I'm not saying anymore. Appreciate you letting me come on."

Jackson threw Kasich a bone, and asked the question he was hoping she would.

The amiable look came back to Kasich's face, and he chuckled with relief.

"Hallie, I have no idea what the future is going to bring, and I believe in that old proverb, the Lord will fulfill the promise of my life," he said. "I want to help build the country, I want to be a positive force in the country, and I hope I'm being one."