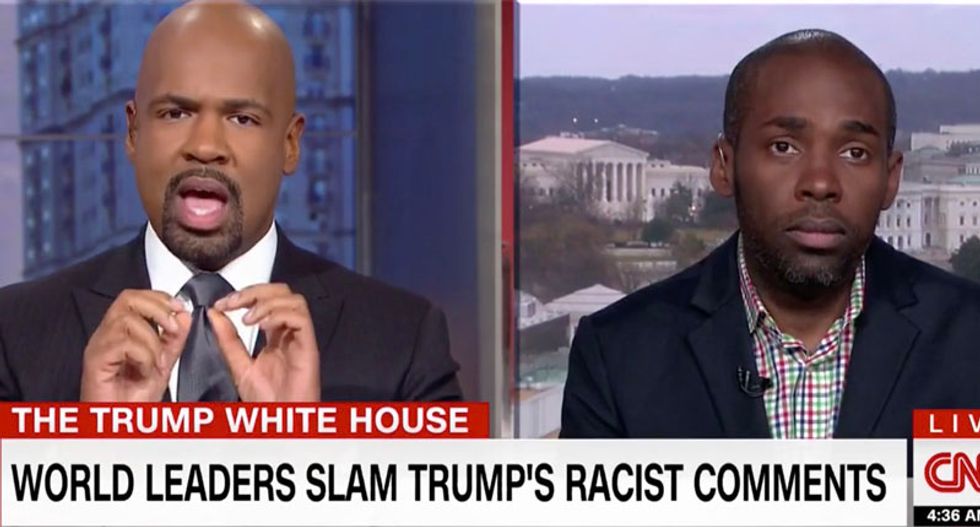 In a combative early Saturday morning exchange, CNN host Victor Blackwell, clearly frustrated with his guest, came down hard on a Donald Trump defender who refused to say the president was wrong to call African nations "sh*tholes."

Appearing on CNN's New Day, former White House aide Paris Dennard stated Trump's words were not ones he would have used, but drew the line at specifically criticizing  the president.

"I think the president is understanding now he's having to deal with issues he's never had to deal with before," Dennard said in defense of Trump's comments about African nations.

"He's understanding now?" Blackwell shot back. "He should have understood that before he said 'I'm running for president of the United States.'"

"What's the evidence that he understands now?" Blackwell pressed. "Is the evidence that he called African nations sh*thole countries? When you say he's now understanding -- this is a president who's been on the job for 11 months now. How long do you need to, not be in office, but be alive to know that 54 nations of Africa are not sh*tholes?"

"Are there specific sh*tholes in Africa? Name them for us," a frustrated Blackwell asked.

"I understand what you're trying to get me to do, but the notion that the president said that about all 54 nations is not true," Dennard replied before talking about a few African countries and avoiding Blackwell's question entirely.