'Jack, you have to stop this': Watch April Ryan scold Jack Kingston for continuing to defend Trump's racism 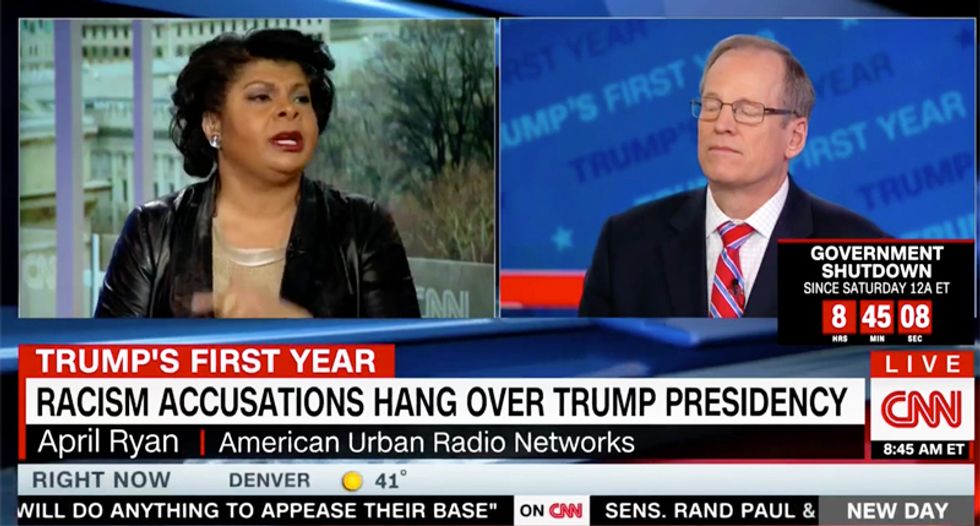 "When you watch what the president has said over the last two years let's say, first the administration of the campaign, are you surprised by concerns that the president is a racist?" host Victor Blackwell asked.

"I'm not surprised by the charges of the critics of Trump that he is," Kingston retorted. "In terms of his language, it is a little unpolished and he does offend certain groups. If you look at him, he has kind of picked on everybody there bob corker to --."

"Let me say this," Kingston soldiered on. "During the campaign, we were often told he was a sexist. and his record as an employer with the Trump organization was very solid pro-women, with upward mobility, with management decisions and pay and everything else. I believe it is the same with African-Americans and I have actually asked that question because I think that there is a story to be told. Otherwise we wouldn't know about it within the Trump organization because it is so easy to sue for racial discrimination these days and the fact that there is not all these cases against him."

"Jack, I'll say this," Ryan interjected. "I understand your point of view but at some point you have to stop and say: is this right, is this insensitive?"

"That kind of starts telling the thing" she continued. "And then [press secretary] Sarah wanted to talk about The Apprentice how he had it on a network for all these years. You have contestants who won who were African-American who said he was not fair to them."

"Now let's move into this piece," she lectured. "This whole year we have not seen any black agenda issues which he said on the campaign trail he would deal with fixing, saying he would have an urban fix."

"And eventually he asked the question 'what the hell do you have to lose?'" host Blackwell inserted. "I have a group of African-American women voters that we'll have on tomorrow , because I don't think we hear from them enough, who say that when the president says that he is for the forgotten man and woman, that woman does not look like any of them."