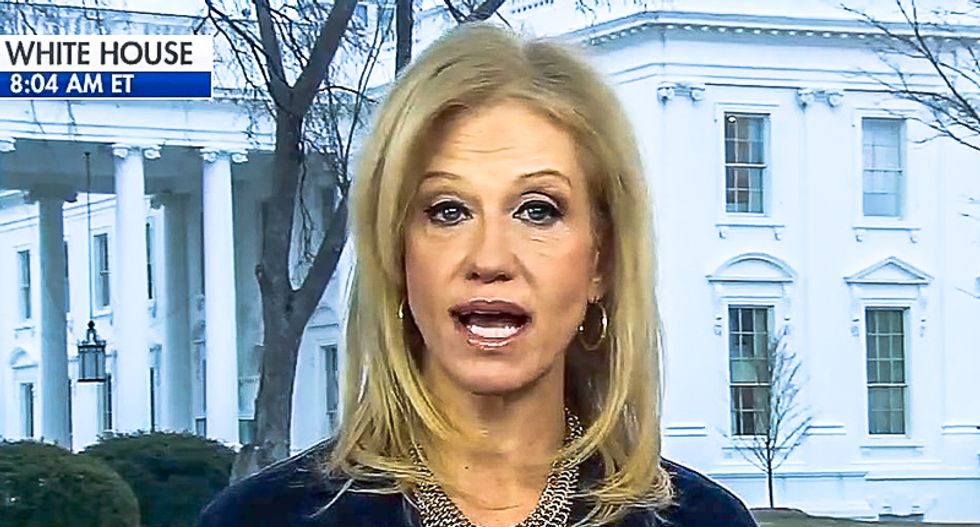 Presidential counselor Kellyanne Conway on Thursday defended the Trump administration's fixation on Hillary Clinton and asserted that the media has "forced" President Donald Trump and his surrogates to continue attacking the former Democratic nominee.

While speaking to the hosts of Fox & Friends, Conway appeared to be upset about an interview with CNN's Chris Cuomo, who noted that the presidential adviser "can’t keep Hillary Clinton‘s name out of her mouth."

Although the hosts of Fox & Friends began Thursday's interview by asking about the Russian dossier on Trump, Conway responded with a rant about Clinton.

"I know people love to talk about how we're so obsessed with Hillary Clinton here," Conway said, rolling her eyes. "The fact is we only have to talk about her because people won't let go of an election that she lost miserably. And if she's going to be an ungracious loser and people continue to talk about the 2016 election in light of the [Russian] dossier, in light of this ridiculous Russian collusion."

"Here we are a year later and we're still talking about it through a nonsense lens," she continued. "What are we doing talking about that constantly, especially on other networks, and not talking about every single accomplishment, all the good that's happening. Stuff happens here every single day."

Instead of focusing on Russia, Conway argued that the media should spend more time reporting on a bill Trump signed "to stop Fentanyl from pouring in our communities."

"We have a Fentanyl problem in this country!" she exclaimed. "What is Fentanyl? Look it up everybody! F-E-N-T-A-N-Y-L. Educate yourselves because the other people want to talk about Hillary Clinton and collusion and dossiers, which haven't been verified."

Referring to her interview with Cuomo, Conway complained about CNN "titillating graphics about Russia."

"Things happen here every single day and yet people are still stuck in last year's election," Conway ranted, "and about that woman who will never be president. I said last night, no one at the White House talks about Hillary Clinton -- only when we're forced to and only with the requisite eye roll."