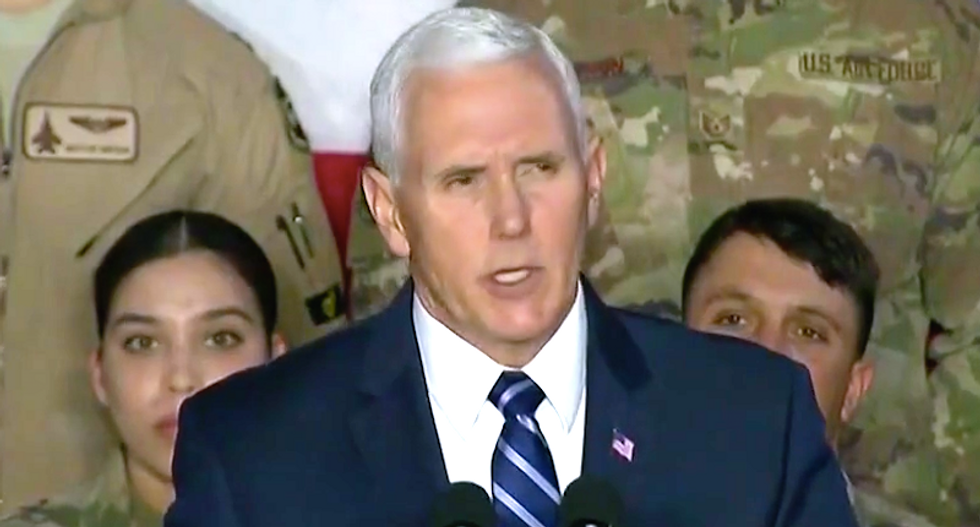 Panelists on MSNBC's "Morning Joe" were aghast that Vice President Mike Pence launched a partisan attack on congressional Democrats during a speech to military service members during a visit to the Middle East.

Pence told U.S. troops stationed overseas that Democrats were to blame for the government shutdown, and he accused them of playing politics with military pay as a ploy to promote illegal immigration.

"The fact that vice president of United States would launch a partisan attack against another party in front of troops overseas is unspeakably bad and is corrosive," said host Joe Scarborough. "The fact that Mike Pence did that after (Sen.) Claire McCaskill (D-MO) tried to get her amendment on the floor to guarantee (service members) that very pay and that Republicans killed it by not allowing that vote makes it even more corrosive."

He asked panelists whether they'd seen another American political leader behave like that.

"I can't recall any precedent for a president or a vice president speaking to U.S. troops, especially overseas, especially forward-based," said MSNBC's Andrea Mitchell, who is traveling with Pence. "We were near the Syrian border. These Air Force teams, these men and women, are flying everyday against ISIS in Syria, so I cannot recall another moment like this."

Richard Haass, longtime president of the Council on Foreign Relations and a veteran diplomat, said Pence's partisan attack was unusual and inappropriate.

"I grew up in an era when politics stopped at the water's edge," Haass said. "When you went abroad, you spoke with one voice, the idea was to show that the country was one in coming together. This, shall we say, is the opposite. It's using troops as props and it's taking our domestic divisions, and essentially it's broadcasting them to the world. Again, this works against the effectiveness of this country in the Middle Rast and beyond that."

"I was in President (George W.) Bush's speechwriting office," Jordan said. "For these foreign trips there's always a lot of speeches that are prepared in advance, but when you're going to a base, it is an address to the troops. It is not about your politics. It's about motivating the men and women on the front lines and thanking them for their service. It's not about you and your political ambitions at the given moment."