Why is so much of what Congress is learning about Russiagate secret? 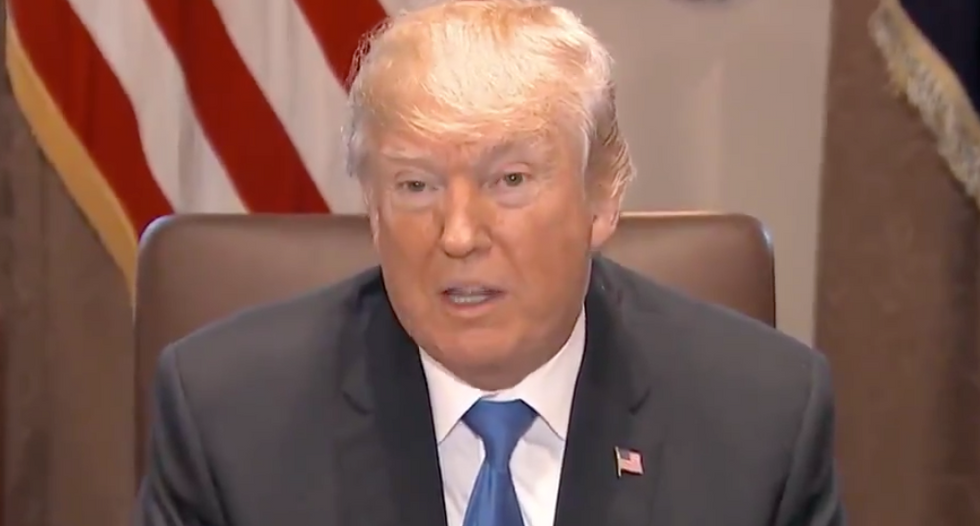 President Donald Trump celebrating the passage of his tax plan. (Image via screengrab.)

Recently, Democratic senator Dianne Feinstein angered her Republican colleagues by releasing a transcript from ten hours of testimony related to an investigation of Russian meddling in the 2016 election and possible ties with Donald Trump’s campaign. Prior to that release, Democrats and Republicans had been arguing about details from the closed hearing. Senator Feinstein said she wanted to let Americans see the full testimony so that they could “make up their own minds.” Her action was praiseworthy, but release of the full transcript did not make a significant impact on public opinion. Few people read the 312-page transcript. It would have been more useful if Congress had given the American people an opportunity to watch the testimony on live television. That is how the public acquired an informed understanding of the Watergate scandal in the 1970s.

There is a striking contrast between Congress’s investigation of the 2016 election and its investigation of the Watergate scandal. Current inquiries are conducted, for the most part, under a veil of secrecy. The American people receive just fragments of information through occasional leaks to the news media. In 1973 and 1974, however, congressional leaders from both parties allowed commercial and public television to cover 319 hours of the Watergate investigation. The three major commercial networks broadcast portions of the Watergate hearings, often in a rotation arrangement, and PBS Television and National Public Radio provided gavel to gavel programming. About 85% of U.S. households were tuned in to one or more of the televised events. Viewers learned a great deal from those broadcasts.

A related approach to public education would be helpful today, but congressional leaders are keeping the Russia probe largely under wraps (as well as transcripts from committee proceedings). They should allow broadcasts on television and radio. Americans need opportunities to witness the testimonies in real time. Absent radio and television coverage, citizens hear only dueling arguments. It is as if the American people were only allowed to read op-ed columns in the newspapers and watch pundits disagree with each other in television programming. Americans are not exposed to the real news. “Primary documents” from the investigations – video-recorded testimony – have mostly been kept from public view.

Sometimes there are good reasons to conceal information. The investigators do not want to expose classified information about intelligence operations, and they do not wish to undermine inquiries by special counsel Robert S. Mueller III. But the lengthy Watergate investigation by Congress in 1973 and 1974 produced important revelations that did not harm concurrent work by special prosecutors, Archibald Cox and, later, Leon Jaworski. Stonewalling by the Nixon administration, not investigations by Congress, impeded the investigations of Cox and Jaworski.

Many details related to the current inquiry into Russian interference can be brought into the open. The facts do not jeopardize national security. Often, concealment relates to politics, not secrets about intelligence operations. For instance, the transcript Senator Dianne Feinstein released in the face of Republican opposition revealed that many claims made by GOP congressmen about a committee’s lengthy interview with Fusion GPS co-founder Glenn R. Simpson were bogus. The transcript appears to show that Christopher Steele, a former senior officer with British intelligence, approached the FBI for legitimate, not partisan, reasons. Steele had uncovered disturbing information about the Russians and candidate Trump.

In the 1970s, leaders from both parties allowed the American people to watch the investigations in their living rooms. GOP and Democratic congressmen acknowledged the seriousness of charges against the Nixon campaign and administration. The Senate voted 77-0 to create a Select Committee on Presidential Campaign Activities, and the House voted 410-4 to authorize the House Judiciary Committee to investigate whether sufficient evidence had been uncovered to impeach the president. When representatives in the House were about to start impeachment proceedings, they permitted television networks to cover that event as well. Congressmen were establishing the ground rules for televising those deliberations when President Nixon resigned.

TV coverage of the Select Committee on Presidential Campaign Activities showed viewers the depth and breadth of the Watergate scandals. White House counsel John Dean gave illuminating testimony, warning there was a “cancer on the presidency.” Alexander Butterfield excited interest when he reported that the president had a secret taping mechanism in the Oval Office. Tennessee Republican Howard Baker raised a fundamental question: “What did the president know, and when did he know it?” Television viewers learned about threats to democracy when North Carolina’s senator Sam Irvin lectured witnesses on the rule of law and principles enshrined in the U.S. Constitution.

The investigations now conducted by Senate and House committees shouldn’t be blocked from public view. Dianne Feinstein was right; the American people deserve an opportunity to “make up their own minds” about evidence related to Trump, Russia, and the 2016 election. Broadcast of some hearings on television and radio are the way to accomplish that worthy goal. Louis Brandeis identified the value of public access long ago. In 1913 the future U.S. Supreme Court justice observed that, “Sunlight is said to be the best of disinfectants.”

Robert Brent Toplin is Professor Emeritus at the University of North Carolina, Wilmington, and he was also a professor at Denison University. Toplin now lives in Charlottesville, where he has taught occasional courses at the University of Virginia. He has published several books about history, film and politics.