'My father sees one color -- green': Eric Trump says his dad's too greedy to be racist 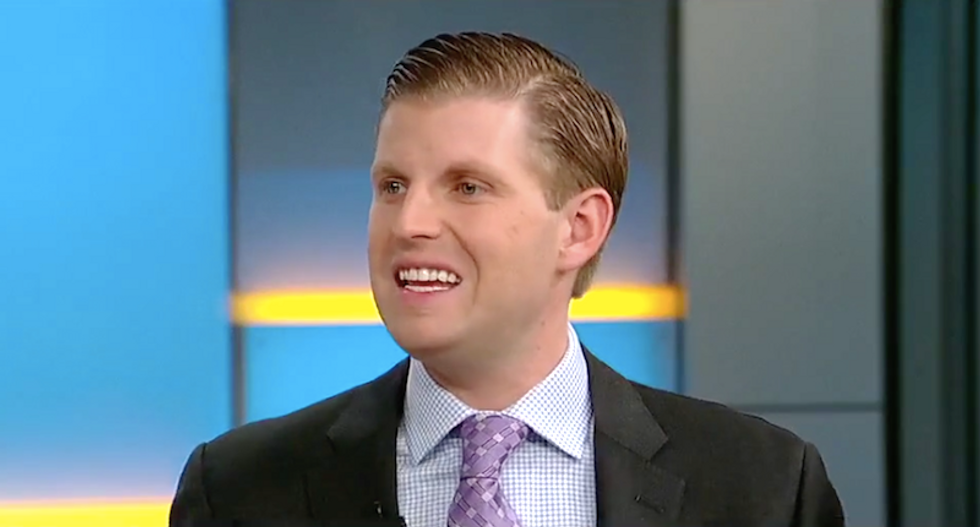 Eric Trump appeared on Fox News to defend his father -- who promoted the appearance in a tweet.

The president's son complained about media coverage of his father's health and racist remarks about "sh*thole" countries during an Oval Office meeting with senators on immigration -- and Trump urged his social media followers to tune in.

"Fox & Friends" co-host Brian Kilmeade asked Eric Trump to comment on the allegations and ask if he could share any insight.

"Your dad, according to people in the meeting, said some thing about race and that people who are calling him a racist for the last five or six days," Kilmeade said. "I know you don't agree with that, but is there anything you can bring to the conversation that is important?"

"My father sees one color, green -- that is all he cares about," Eric Trump said. "He cares about the economy. He does not see race -- he's the least racist person I have ever met in my entire life. It is total nonsense. At same time they are saying that, they will never report African-American unemployment is the lowest it's ever been, the lowest it's ever been in this country -- they won't give him any credit for that. By the way, he campaigned on that, but then they'll go out and call him racist. It's very sad, it's a race to the bottom. They stoop very, very low."

"The reason they do this is they don't have their own message," Eric Trump said. "What is the message on the Democratic side? Who are the front runners? What do they stand for? They don't stand for anything, they have been obstructionists. They waste a tremendous amount of money. They come out, no matter what he did -- if he would solve cancer tomorrow they would criticize him for it. That is very, very sad. That is not a winning recipe."

The New York attorney general is investigating whether the Eric Trump Foundation improperly distributed funds intended for cancer research to benefit the president and his family members.