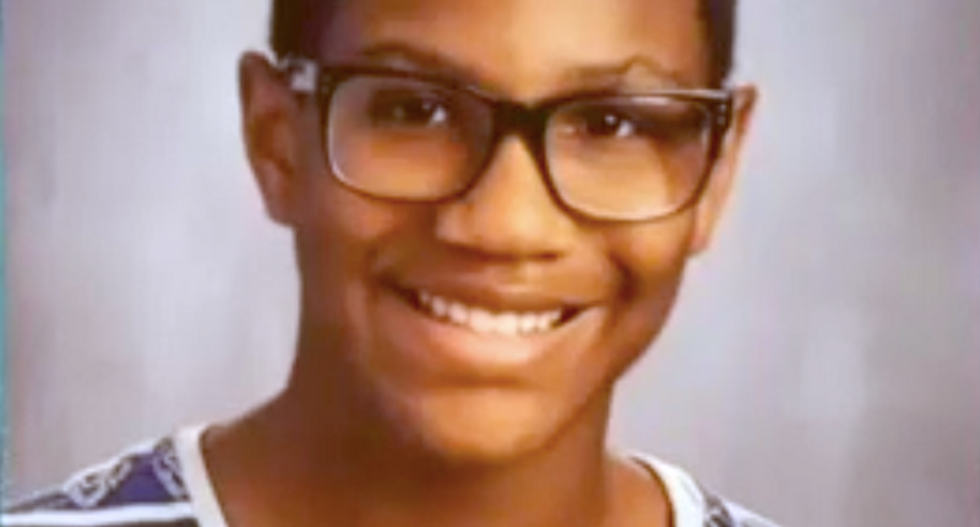 A black Ohio teen said his white social studies teacher told him other students would lynch him if he didn't get back to work.

Tanisha Agee-Bell admits her 13-year-old son Nathan was talking in class when the Mason Middle School teacher made the remark, reported the Cincinnati Enquirer.

"His teacher had told him that if he didn't get back on task, that his friends were going to lynch him, and we thought he must have misunderstood," Agee-Bell told WXIX-TV.

Nathan told the teacher, Renee Thole, that her comment was racist, and the teacher asked why he believed that.

Agee-Bell said the incident happened last month, but her son did not immediately tell her because he feared getting in trouble for questioning the teacher in class.

After Nathan told his mother, she contacted Thole for an explanation -- which she said was worse than her son reported.

"(She said) if he didn't get back on task, his friends were going to form an angry mob and lynch him," Agee-Bell told WXIX. "I was just taken aback, because I said, 'What you said is actually worse than what he said you said.'"

Thole admitted she had acted out of frustration, and Agee-Bell agrees her son should have been focused on his work -- but she said the explanation was completely unsatisfactory.

"I told her, 'Next time you're frustrated are you going to call him a n*gger?'" Agee-Bell said.

Agee-Bell contacted the school and had her son removed from Thole's class, but school officials declined to say whether the teacher had faced any disciplinary measures.

"As educators, sometimes we mess up -- and clearly that happened here," said Mason Schools spokeswoman Tracy Carson. "It was amazing (Nathan) was brave enough to confront the teacher."

Thole apologized to Nathan in class but didn't explain to the mostly white class why her remark was wrong, and Agee-Bell said school officials haven't taken the issue seriously enough.

Agee-Bell intended to speak Tuesday at a school board meeting, but she said officials asked to speak privately with her afterward -- which she said lasted only five minutes, and the teacher's remarks were never mentioned in the public meeting.

"I believe Mason is a community that is OK with the way it is," Agee-Bell said, referencing racial tensions.

Agee-Bell has been a member of the school's diversity council for more than a decade, and she told the newspaper about racial tensions in the affluent suburb north of Cincinnati.

Teens in nearby Kings, about a mile east of Mason, were banned from a youth basketball league this month for wearing jerseys with racial slurs printed on them for several weeks until a parent from an opposing team complained.

Agee-Bell said she doesn't allow Nathan to play with Airsoft guns because she fears neighbors will call police, and she blames herself for moving to Mason.

"My son was walking around thinking he did something wrong," she told the newspaper, crying.

‘We will not be defined by this tragedy’: Thousands mourn four Oxford students during vigil

Allison R. Donahue, Michigan Advance
While thousands gathered in downtown Oxford Friday night for a vigil to honor the four Oxford High School students who were murdered in Tuesday’s shooting, the message from community and state leaders was about the community’s resilience.
“This community is a rare, rare thing,” said U.S. Rep. Elissa Slotkin (D-Holly) to a crowd of Oxford students, parents and community members. “I represent a lot of people and not every community could do what this community has done. You have not hesitated. And I want you to lead. Lead in your households; lead in your community; lead in your school. Do not hesitate.”

Since the shooting, the Southeast Michigan community has raised thousands of dollars for the victims and their families, held numerous vigils and memorials and offered each other support to mourn together.

“These last few days have been some of the hardest we’ve ever had. Michiganders are strong, but we are brokenhearted right now,” said Gov. Gretchen Whitmer to the crowd. “We’ve lived through one of the worst weeks in Michigan’s history, but this week, we’ve also seen some of the best in one another.”

The parents of a 15-year-old who shot dead four students at a US high school with a gun bought by his father have been arrested as a SWAT team stood by after being charged with involuntary manslaughter, according to CNN

The whereabouts of James and Jennifer Crumbley, the parents of shooting suspect Ethan Crumbley, had remained unknown for much of Friday, prompting authorities in Oakland County, Michigan to consider them fugitives.