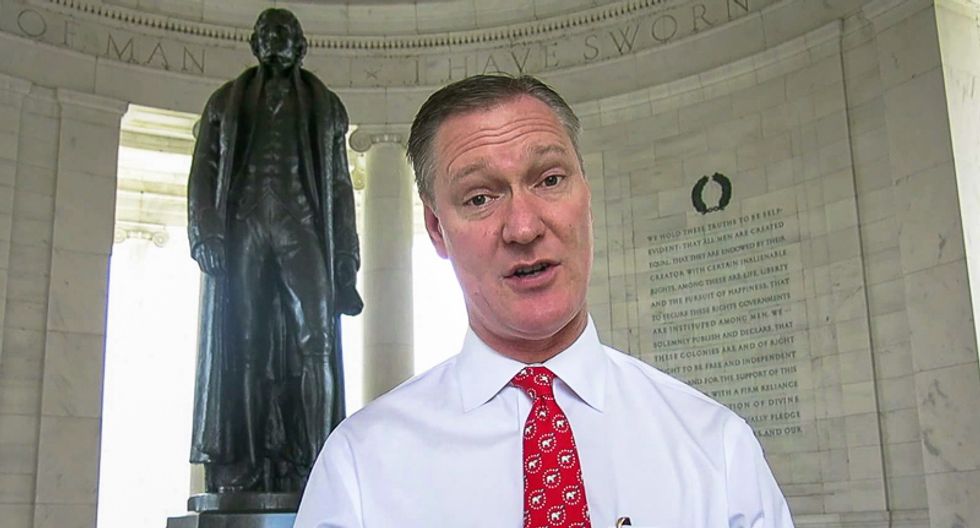 Rep. Steve Stivers (R-OH), the head of the NRCC. Image via screengrab.

Ohio Rep. Steve Stivers (R) said this week what few Republicans are willing to say out loud: the plan to keep the U.S. House of Representatives in 2018 "starts" with gerrymandering districts in favor of his party.

In an interview with Politico, the chair of the National Republican Congressional Committee (NRCC) talked about Republicans' midterm strategy.

Stivers said that he expected President Donald Trump to be helpful in districts like the Pennsylvania 18th, an open seat where Republicans are heavily favored.

“You know, I think we need to be smart about how and where we use everybody, every surrogate, whether it’s the president, vice president, you know, other members of Congress, other folks who want to help,” Stivers explained. “We’re not going to give our battle plans to everybody, but we’re going to make sure we’re smart about the way we use folks.”

Stivers suggested that the NRCC was following a two-pronged strategy.

But the first reason, he says, is a factor everyone knows about, but which Republicans rarely tout out loud: “I think it starts with the congressional lines,” Stivers said, pointing to the successful gerrymandering after 2010. Later, asked whether that validates Democrats’ argument that Republicans have tilted elections to their advantage, Stivers shrugged off the criticism: “You can say that, but the people elected them.”

Stivers said that he also expects President Trump's tax cut bill and positive feelings about the economy to boost GOP chances in 2018.

In fact, the Republican campaign to hold the House has branded itself with the slogan "the Great American comeback."

According to The Washington Post, at least two-thirds of the open seats Democrats will need to take back the House are "out of reach" thanks to the Republican Party's successful attempts at gerrymandering Congressional districts to its advantage. The process works by corralling Democratic voters into as few districts as possible, effectively disenfranchising their votes.