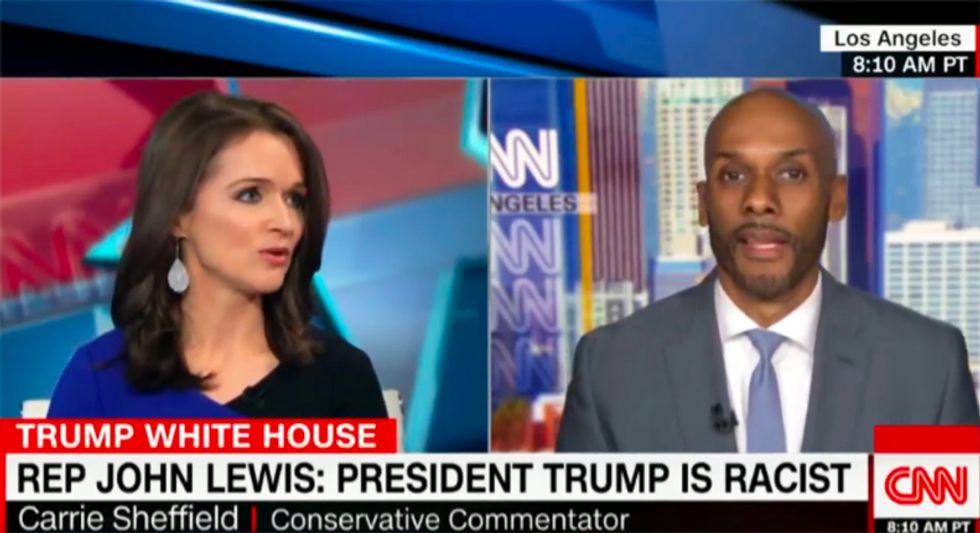 A former aide to President Bill Clinton recited  a comprehensive list of President Donald Trump's history of racism on CNN Monday morning after  a conservative commentator claimed the lives of African-Americans were improving under the president's leadership.

According to conservative Carrie Sheffield, Republicans and the president could do better reaching out to minorities, but overall things have improved for  them during the Trump administration.

"I would love to see more unifying language coming from the Republican leadership, I’d love to see it coming from the president,” Sheffield explained. “But I do think it is also important to look again at the policies and see how the lives of African-Americans have been improved.”

Coming on the heels of Trump's comments about "sh*thole" African nations, and with Sheffield making the claim on Martin Luther King Day, Keith Boykin called her comments "ridiculous" and launched in to an attack on the President.

“This nonsense that is going on out here from Carrie, this is ridiculous,” Boykin explained as her turned to Trump's bogus claims about black unemployment.

“He lied about the African-American unemployment rate!” Boykin strongly asserted. “And then as soon as he got in office, he inherited the declining unemployment numbers and he took credit for what President Obama did. That’s disgusting, it’s abhorrent and the president should apologize to President Obama, not only for the lies about the birth certificate, but about the lies about the African-American community that he continues to spread!”

“And you Carrie, to sit here and defend this, when you should know because you’re a smart person who studied the statistics, you should know that the president did nothing, has not lifted a finger to help the African-American community," Boykin lectured. "I don’t want to hear any nonsense about taking credit for things that President Obama did unless he acknowledges that President Obama had some role in doing that."