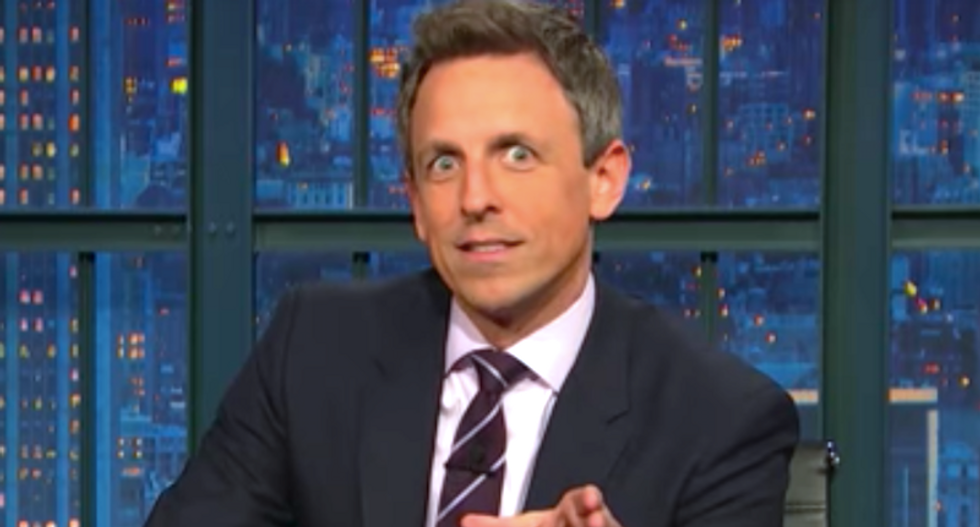 Adult film actress Stormy Daniels claims she had a yearlong sexual relationship with the future president in 2006, around the time Melania Trump gave birth to their son, but right-wing Christians say that shouldn't matter.

“Why are evangelical voters overwhelmingly sticking with Trump despite his apparent contempt for the values they claim to believe in?” Meyers asked.

Tony Perkins, president of the anti-LGBT Family Research Council, said he backed Trump because he's "willing to punch the bully" -- and he said there were only two cheeks to turn in accordance with Christ's teachings.

“Technically, you have four cheeks,” Meyers said, reminding viewers that Daniels claims Trump asked her to spank him with a Forbes magazine with him on the cover. “Two on your face and then the magazine catchers on the back.”

Perkins said conservative Christians were willing to give Trump a "mulligan" for his moral failings.

“Ah yes,” Meyers said. “It’s just like Jesus said to the apostles when they found him in a strip club: ‘Bros, I’m gonna need a mulligan on this one.’”

Meyers also mocked Matt Schlapp, the president of the American Conservative Union, who questioned Daniels' claims because she made them to tabloid magazine InTouch.

“I guess it’s not surprising that Matt Schlapp would defend Trump,” Meyers said. “He’s apparently such a Trump fan that he changed his last name to the sound a Forbes magazine makes when it hits Trump’s ass.”

The "Late Night" host said the entire situation was surreal.