'The divorce has been messy': Wall Street Journal reporter explains why Breitbart 'is in the crosshairs' of Trump-Bannon split 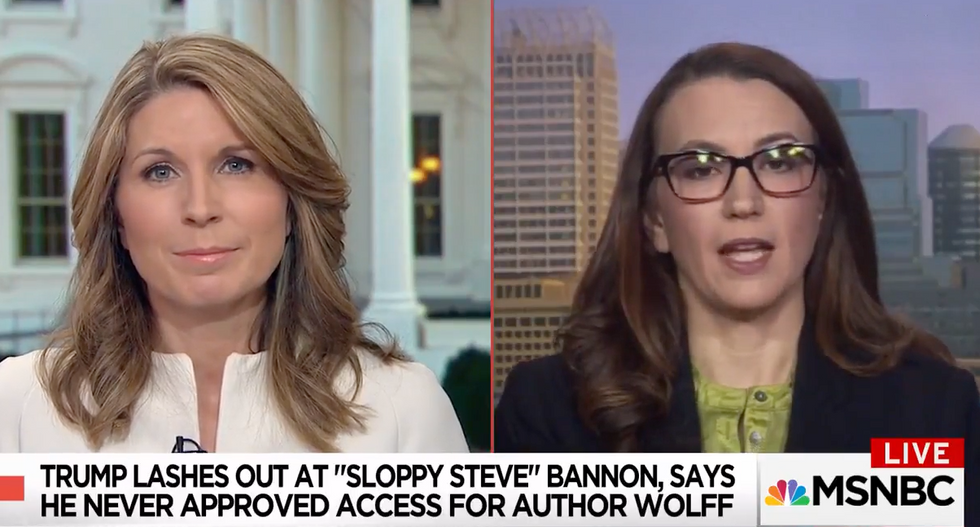 "In some ways, this is Donald Trump's third public divorce from a one-time soulmate with whom he'd fathered something beautiful,” Wallace began during MSNBC’s Deadline: White House.

“In this case, he and the man he now calls Sloppy Steve birthed a rowdy coalition of disenfranchised Republicans—men and women who responded to the call for a resurgence of the forgotten men and women,” Wallace added.

Wallace asked Bykowicz about the fissure that’s formed between Bannon and Trump, following the explosive publication of journalist Michael Wolff’s new book, Fire and Fury: Inside the Trump White House. The Journal reporter explained the issue reached a fever pitch when Bannon brought up Trump’s children.

“Not only did people warn Steve Bannon about not going there with Trump's children, but it's fairly obvious that that is a very sensitive issue for the president and most human beings,” Bykowicz said. “So you have to wonder what he was thinking all those times he spoke with Michael Wolff in the West Wing."

“The divorce has been extremely messy,” she added. “And really kind of caught in the crosshairs at this point is Breitbart News, a conservative website that was very influential all throughout the Republican primary election last year, was kind of on deck to play a really important role in the 2018 midterms."

"Now the Breitbart board members, as we reported yesterday, are trying to figure out what to do with this mess that's sort of landed in their lap," Bykowicz continued. "They are trying to choose between Steve Bannon, who has really become sort of a face of the site, and Donald Trump who most readers of Breitbart are very supportive of. And there's no easy way out of this puzzle.”

Bykowicz later noted it’s an “open question” regarding “what happens to Trump’s base at this point.”

“That's going to play a huge role in the 2018 midterms,” Bykowicz explained. “Now there's such a cult of personality around this president that his supporters, some of them it just feels like they're with him no matter.”