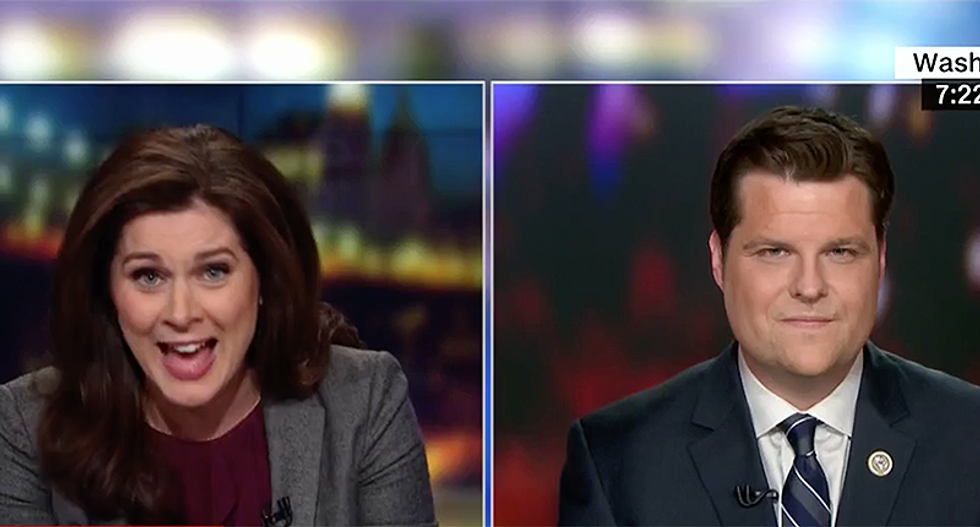 Rep. Matt Gaetz (R-FL) got a little testy when being asked about the dossier researched by Christopher Steele.

In an interview with CNN's Erin Burnett, Gaetz began by talking about the "political" nature of the dossier, noting it was eventually funded by Democrats.

"When you say the dossier is political by Democrats, that it's proof of collusion by Democrats and Russians, as the president has said, I just want to lay out the facts here in terms of how this dossier happened," Burnett said. "The firm behind it was first hired in September 2015. That date according to The New York Times, they were hired to do opposition research on Trump during the Republican primaries by the Washington Free Beacon, which is a conservative website."

She explained that the website was funded by a major donor to Marco Rubio, a Trump rival.

"It was not until April of the following year, so from September of 2015 to April of 2016, when Trump won that crucial primary against Ted Cruz and it became clear he could be the Republican nominee, that's when a a law firm picked up the tab and started paying Fusion," she continued. "So, Republicans became Democrats. Why do you only accuse Democrats? Why do you say this is a Democratic thing?"

"They're the ones who paid for it," he said as if he didn't hear what Burnett said.

"So did Republicans," she replied.

He then repeated the allegation that Democrats "were the willing participants to pay Fusion GPS to colluded with the Russians" to dig up dirt on Donald Trump.

"This brings me back to my point. We've just established there are things in here which are true, so you're saying they're paying them for lies?" Burnett asked.

He claimed that he was doing nothing but quoting former FBI Director James Comey.

"Some things are unverified, certainly by CNN, but others are not," Burnett said. "In fact, Congressman, let me just make this point: on page 279 of the testimony, Glenn Simpson's lawyer says, 'somebody's already been killed.' Nine Russians, high profile Russians, died nine months after the U.S. presidential election. If people may have died because of this, is that enough for you to say, 'I want to know if everything in it is true' instead of 'a Democrat's paying people to lie' as you just said?"

Gaetz insisted that people were paid to lie about Donald Trump and cover their tracks.

Burnett explained again that there were things in the report that are true. "So, this point about lies doesn't add up." She also noted that Steele felt his findings were so concerning he shared it with the intelligence community out of concern. She asked if Gaetz was simply "shooting the messenger" for delivering the information.