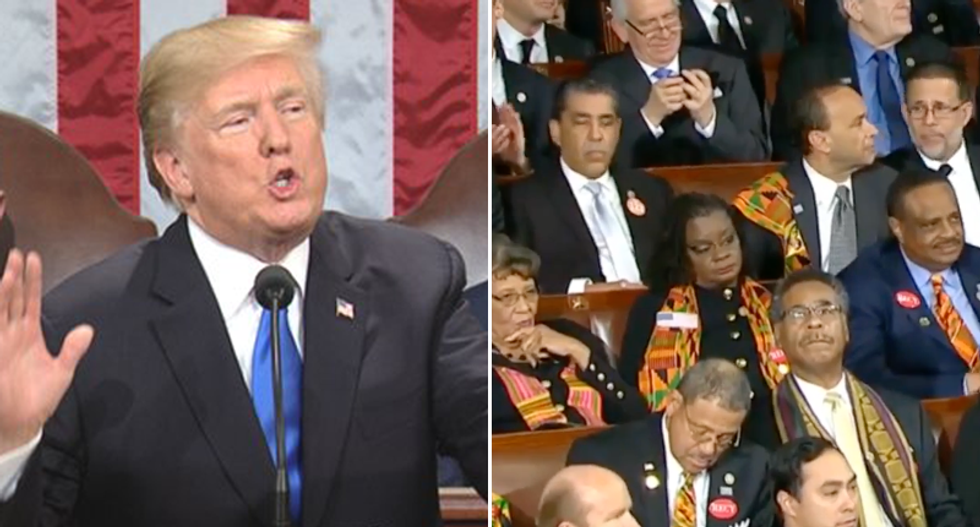 Donald Trump on Tuesday gloated about his efforts on behalf of the African American community, reverting to his oft-repeated line that the African American unemployment rate is at its lowest rate ever recorded—and members of the Congressional Black Caucus were unimpressed.

“Something I’m very proud of: African American unemployment stands at the lowest rate ever recorded,” Trump said during his State of the Union address. as members of the Republican party stood to applaud the president, CNN’s cameras cut away to the Congressional Black Caucus, who sat motionless with looks of disbelief and disinterest clear on their faces.

Trump has tried various appeals to black voters, 88 percent of whom voted for Hillary Clinton in 2016. During the election, he asked communities of color, “What do you have to lose?” in a speech declaring war zones “safer than living in some of our inner cities.”

His latest appeal is centered around the black unemployment rate, which is currently at currently 6.8 percent. But, as NPR notes, “those rates had been falling for long before Trump took office, and their declines don't appear to have picked up speed.”

“Indeed, both of these rates have been falling relatively steadily since around 2010, early in President Obama's tenure in the White House,” NPR reports.

Still, Trump insists on digging his heels in when it comes to his hand in the unemployment rate among African Americans. Sunday, the president took to Twitter to attack rapper Jay-Z, suggesting “Somebody please inform Jay-Z that because of my policies, Black Unemployment has just been reported to be at the LOWEST RATE EVER RECORDED!”

Jay-Z triggered Trump’s fury during a CNN interview Saturday, when he criticized the president’s “sh*thole” remarks.